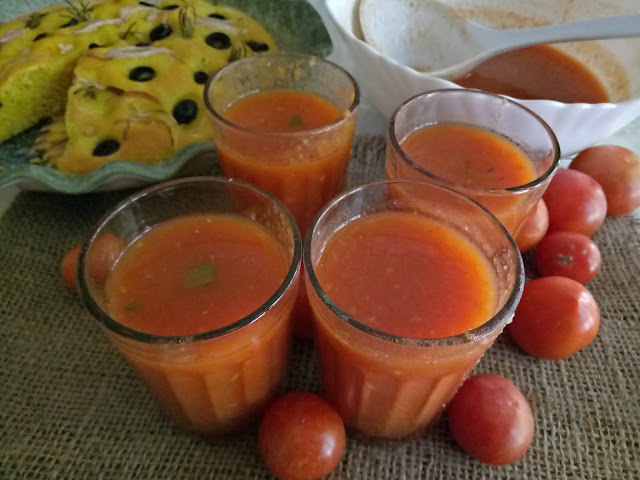 East meets west in this simple meal. One is a hearty Indian soup referred to as shorba in the northern part of our country. And the other has its origins in Italy. This year my tomato plants took a beating as our garage floor had to be raised. I usually grow my plants next to the garage as there’s any other space left. Work went on while I was away and many tomato plants were destroyed. I did get some green ones and a few ripe ones but that was about it.
So when my husband’s cousin turned up bearing a bagful of ripe home-grown tomatoes, I was over the moon! The first thing that I made was a tomato tart with left-over pastry dough. Several more went into butter chicken with store-bought tandoori chicken.:) 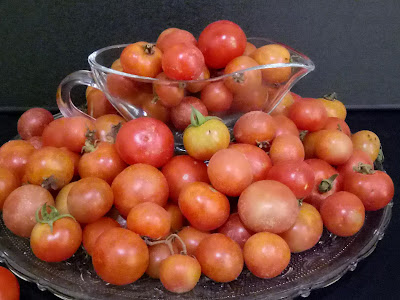 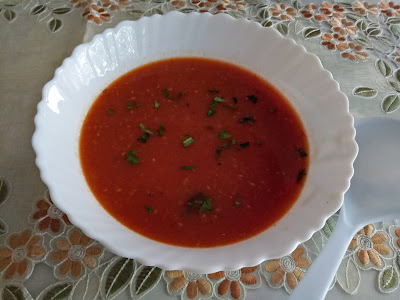 In a pressure cooker, add all the ingredients except the sugar, oil, and cumin seeds. Add a little more than a cup of water.
Let it cook for 4 whistles. I used a small pressure cooker.
After the steam goes off, open the lid. Discard the whole spices.
Blitz in a mixer. Check the seasoning and make adjustments.
Add the sugar, as per taste, and blitz again.
Transfer to a serving bowl.
Heat the vegetable oil in a pan.
Throw in the cumin seeds. Switch off the gas as soon as they sputter.
Pour this oil on the bowl of shorba.
Garnish with herbs. I used a bit of serrated coriander in this shorba.
There are quite a few variations in shorba recipes but I think this is also really good! 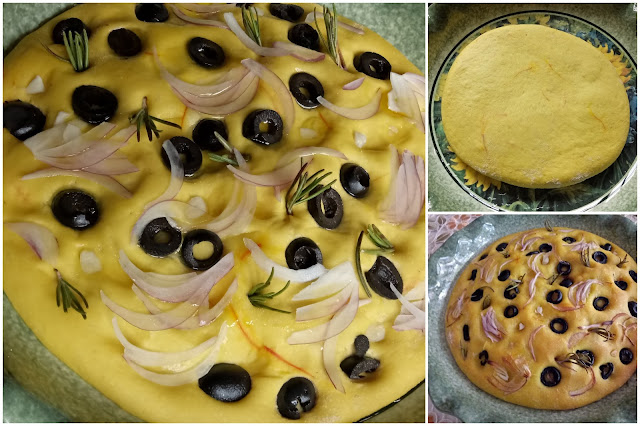 I came across this saffron focaccia recipe from a book by Martha Day. The dough is made in a food processor. But I knead with my hands for all the bread that I bake.
Ingredients:
Pinch of saffron strands
150 ml boiling water
2 cups all-purpose flour
1/2 tsp salt
1 tsp easy-blend yeast
1 tbsp olive oil

For the topping:
2 garlic cloves, sliced
1 small onion cut into thin slices
rosemary sprigs
Some olives
1 tbsp olive oil
Infuse the saffron in the boiling water. Leave to cool till tepid.
Place the salt, yeast, flour and olive oil in a large bowl.
Make a well in the centre and add the saffron water.
Mix till the dough comes together then tilt the contents to a work surface and knead for 10-15 minutes.
Then place the dough in a bowl, cover and let it rise till double in size.
Punch down the risen dough on a lightly floured surface and roll it into a thick disc.
You could roll it in other shapes too. But I used a circular ceramic pie dish. This was lightly greased. The recipe had an oval bread.
Preheat the oven to 200 C.  Press indentations in the dough.
Set aside for 25-30 minutes.
Cover with the topping ingredients, brush lightly with olive oil and bake for 25 minutes or till the loaf sounds hollow.
Leave to cool.

This was a lovely combination. And a first for me. In kitchen gardens it’s the end of the season for tomatoes. They usually last till May but the rains came early this year . I can imagine a lot of households busy making use of the last tomatoes from their gardens. As for me I still have to make some sauce and some chutney.