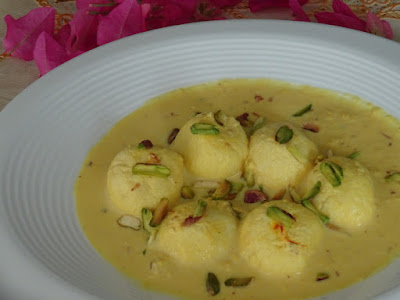 It’s a traditional Bengali dessert that I made for Diwali. The Festival of Lights would be incomplete without mithai. So rasmalai it is. But with a major cut on the sugar factor.
And I used a short-cut method by using ready-made rasgollas. One of the Diwali hampers that came in included tinned rasgollas (soft and spongy cottage cheese balls in sugar syrup) and those were what I used for this dessert.

Ingredients:
1 litre full fat milk
A pinch of cardamom powder
A pinch of saffron
1 tsp almond paste or flour
Toasted and chopped pistachios for the garnish
Tinned rasgollas (I used 8)

Method:
Heat the milk in a heavy-bottomed pan. Add the cardamom powder and stir at intervals.
From the pan, take about 2 teaspoons of warmed milk in a small bowl and soak the saffron in it.
After a few minutes put the saffron/milk mix back in the pan.
Let it remain on simmer for about 45 minutes till the milk is reduced to less than half.
Meanwhile, open the tin and take out the rasgollas.
Squeeze out the syrup and set aside.
Add a tablespoon of almond paste to thicken the milk. You could use cornflour but since I had a bit of almond paste left over from making almond milk, I used that.
Stir and let it cook for a couple of minutes.
About 5-6 minutes before you remove the pan from the fire, add the prepared rasgollas. At this point I added two tablespoons of the syrup to the milk. There is no another sweetener added to this dish.
Take the pan off the heat and let it cool.
Chill in the fridge for a couple of hours. Before serving, scatter the pistachios over the rasmalai.
Enjoy!
Unlike regular rasmalai, this one only has a hint of sweetness. You cannot totally cut down on sugar but it can be greatly reduced. 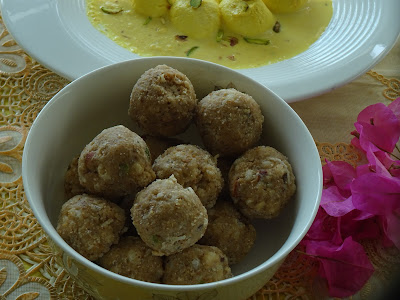 Another sweet that I love…gond ke laddoo! These were gifted to us. Wishing you all a very Happy Diwali!