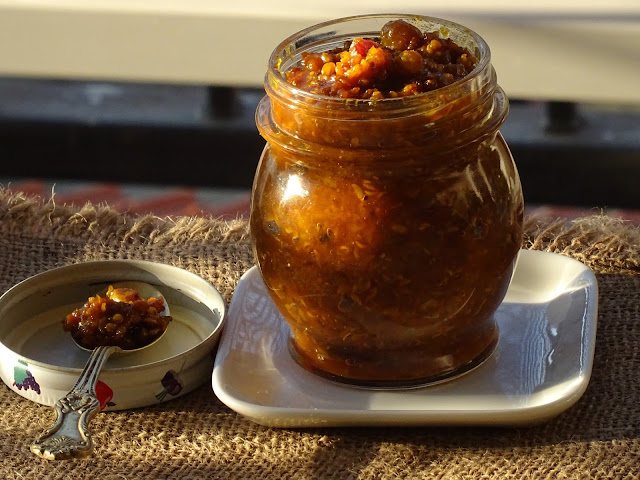 This is a first for me. Making a chutney that is sweet and sour out of an ingredient that is known for its bitterness. So far I have only used it in tempering dal, curries and pickles. The sharp aroma as soon as a few of them hit the hot oil is reminiscent of the smells of childhood…of someone’s dal being given the final touch or someone’s sabji getting an aromatic start.:) Now that the cooler season is coming, I am looking forward to using a lot of methi leaves in my dishes.
The other day I was watching a chef (can’t remember the name) rustle up a few Rajasthani dishes. One of them was Govind Gatta and the other was Methi Ki Launji. The latter reminded me of my old scrapbook from the 90s where I had kept weekend supplements from The Telegraph, the most widely circulated paper in our region. One of the front runners of hearty Indian cooking was Jiggs Kalra. I had kept a cutting of a dish titled Methi Kishmish in one of the supplements where the chef wrote a weekly column. So it gets made this way too was what I thought and never actually made it. But the thought remained…maybe one day. In a household that loves its potatoes and only a few more ingredients, it would have been foolish for me to make a chutney that I would surely have to give away. And giving away is easier now as my siblings are in the same city along with the nephews and the nieces.:)
Ingredients:
100 grams methi seeds
A pinch of asafoetida/hing
A quarter tsp cumin seeds
A quarter tsp fennel seeds
3-4 dry red chillies
2-3 Indian bay leaves
Turmeric powder, as required
Red chilli powder, as per taste
1/2 cup grated jaggery
Dash of salt
Toasted and ground cumin and coriander powder
7-8 dates, stoned and chopped into small pieces
3 tbs mustard oil
A handful of raisins
Tamarind water, as per taste 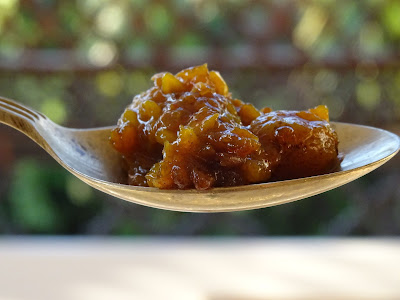 Method:
I started this a day earlier by soaking the fenugreek seeds . Leave overnight. If you want to remove the bitterness, you can change the water from time to time. The next morning, drain the seeds in a colander. After the water drains off you can place the colander inside the oven. This makes sprouting faster. I hadn’t intended to sprout the seeds but while finishing off other things in the kitchen and not getting to make it straightaway, I noticed that the sprouting had already begun. So far so good. Bitterness quotient, reduced.
Cook the soaked seeds in a pressure cooker with about 11/2 cups water. I let it cook for one whistle. After the steam went off, the seeds were again drained in a colander. 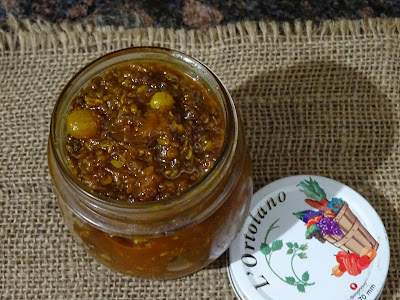 Soak some tamarind in warm water. Set aside. You could also use amchoor powder instead of tamarind pulp.
Heat the oil in a kadhai. When it comes to smoking point, throw in the aromatics…hing, cumin seeds, fennel seeds, dry chillies, Indian bay leaves.
Then add the methi and stir well. Add the spices and cook till the mixture comes together. Add the chopped dates, raisins, salt and grated jaggery. Continue to took till the chutney thickens.
Squeeze out the pulp from the soaked tamarind and add it along with the water it’s been soaked in.
Give the chutney a good stir and remove from the flame.
Once it cools down completely, transfer to a bottle and keep in the fridge.
I intend to finish this in a week’s time, mainly with puris and roti.