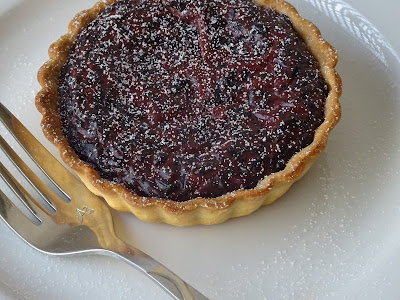 The latest book in my cookery book collection is Patisserie Maison by Richard Bertinet. Leafing through the visual treats and the goldmine of information, I stopped at the page where the rice pudding tartlets stared back at me from leaf-shaped moulds. Where do you even get theeeese?
Made with arborio rice and sweet pastry, I immediately thought of my little stock of black rice left in my pantry. I had thought of making risotto ever since I heard that black rice works out well in that dish. But rice pudding in a tart sounded irresistible! Particularly black rice.

Earlier we used to get this rice which is rich in antioxidants from the neighbouring state of Manipur but now farmers in Assam are getting into black rice cultivation as there is more profit in growing this crop. You might be interested in checking out this link.
I made the dough for the sweet pastry and as they rested in the fridge, I went ahead with the  rice pudding. So far I have only made Indian style rice pudding that is called kheer. Made with thickened milk, the flavourings are usually saffron or cardamom. But in this case I first cooked 100 grams of rice in a pressure cooker along with the bit of water that was used to soak the rice. Black rice has a nutty texture and the cooking period is a little longer than regular rice.
The other additions to the pudding apart from milk and sugar were: cream, one scraped vanilla bean, zest of one lemon and one crushed cardamom.
The pastry was rolled out and baked blind. After the shells had cooled down, I spread a tablespoon of apricot jam on the base of the shell. Then I filled them up with the pudding and baked them at 180C for about 25 minutes. By that time a crust had formed on top of the tarts and they looked done. 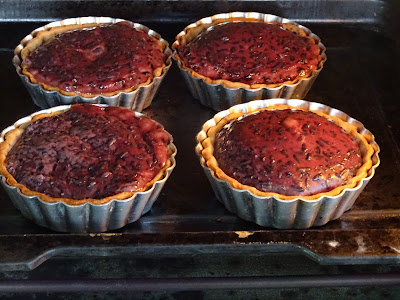 I couldn’t resist taking this picture midway through the baking as the pudding bubbled away in the oven.

The recipe in the book uses home-made raspberry jam. A teaspoonful of jam is spread on the base of the tarts before the filling goes in. Since the only jam I have now is an apricot jam, I used it. 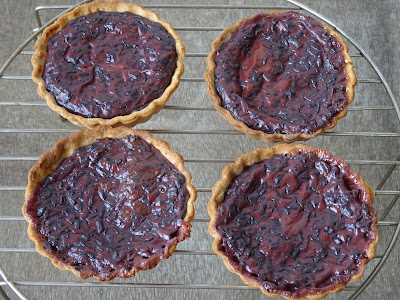 This dish was a spur of the moment thing. I had seen rice pudding tarts before but had never made any. The leaf-shaped moulds did it and the twist with black rice was worth it. Every bite was delightful with a hint of vanilla, the lemony zing and cardamom and most of all the fragrance of the rice itself.