Because I had blogged about banoffee pies in December, it just seems so soon to write on the same recipe. But with my younger son home (he divides his time between Delhi and Kathmandu) I have been making a few desserts. And one advantage of being a food blogger is that the children can go through my posts and choose what they would like to eat!:)) And since he leaves tomorrow this is his last dessert on this trip home.
I have been making dulce de leche quite often. It may sound tedious…boiling condensed milk tins for 3-4 hours until it turns to toffee but the joy of opening that tin to discover the golden caramel is such a delight. Sometimes I make a simple dessert of broken bits of biscuits, a few coarsely ground nuts, some cream and a scoop of dulce de leche. That’s heaven in a shot glass!

I made the pastry shell from left-over pastry dough that I usually keep in the fridge. Rolled it out and baked it blind till it was golden brown. After it had cooled down, I started assembling. While the pastry was baking, I whipped the cream till it held its shape. The other ingredients were all ready and waiting to be used… 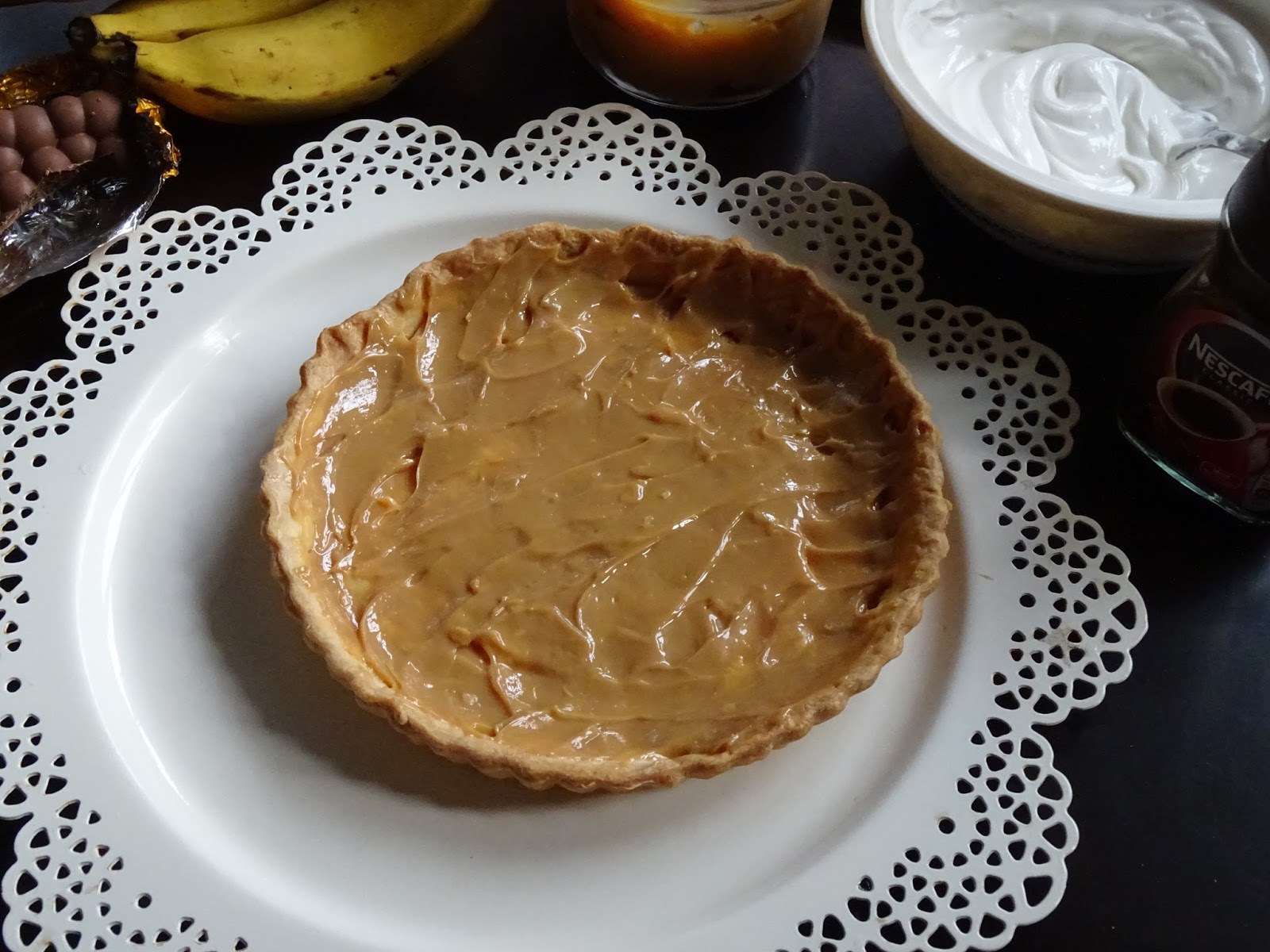 I layered the cooled pastry shell with about 3 heaped tablespoons of the caramel. Then two bananas were peeled, chopped and scattered over the caramel. Forgot to take a picture here. I sprinkled instant coffee powder on the banana slices. That gives a really nice taste as you dig into the pie. The cream was piped on top of the bananas. The final garnish was a bar of milk chocolate grated all over the cream layer.

Voila, the banoffee is ready! This tastes best at room temperature. As I type this only one wedge remains. And that piece, I know forsooth, will not see the light of day!!

I only made a single layer of everything. You could make two banana layers with more chocolate in between. And more coffee too! The desserts I make aren’t overly sweet. First of all, I commit the cardinal sin of making sweet pastry shell without adding sugar. No sugar is added to the whipped cream. The only sweetness comes from the caramel, the bananas and the grated chocolate. The last isn’t much. And the darker the caramel the less sweet it tastes. It’s almost like having a guilt-free dessert.:)