With a tin of condensed milk in my pantry and the thought of a delicious muffin drizzled with dulce de leche, I had to do something about it. But in the process of creating the toffee (caramel), I changed my mind and opted for banoffee pie.The last time I made this pie was several years ago with a biscuit base. And the proportion of biscuit crumb to butter was not right. I remember how hard the crust was.
According to Wiki, credit for the pie’s invention is claimed by Nigel Mackenzie and Ian Dowding, the owner and chef respectively of The Hungry Monk Restaurant in Jevington, East Sussex. The recipe was adopted by many restaurants across the world. The word “banoffee” entered the English language and became used to describe any food or product that tastes or smells of both banana and toffee. A recipe of the pie using a biscuit crumb base is often printed on tins of Nestle’s condensed milk.
Nigel Mackenzie died on 29 may 2015 at the age of 71. 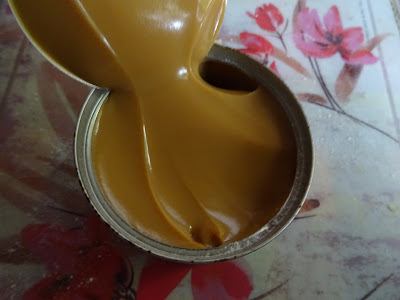 Boiling the tin for a few hours sounds tedious but with the weather turning cooler I’m back to lighting fires in our backyard. There was plenty of unsightly twigs and dead branches to be burnt. So I added some charcoal and had a fire going for a few hours. Meanwhile in a large pot with plenty of water the tin merrily boiled away. One point to be noted is that at all times the tin must remain submerged or else it might burst. After three hours and after the tin had cooled down somewhat this is what the content looked like. Exactly the way I wanted it to be. (After using the caramel for the pies, the remaining caramel was stored in a glass jar).
Ingredients:
400 gram tin of condensed milk prepared as per the method described above
6 pastry shells that I had made the previous day
3 bananas sliced thinly
2 tsp lemon juice
200 ml double cream, whipped
A bit of dark chocolate to grate on top of the cream 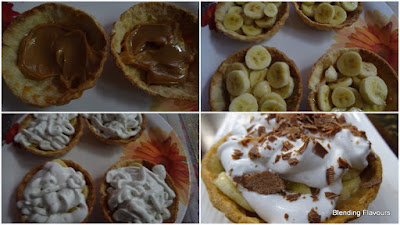 Method:
Peel and slice the bananas. Mix the slices with the lemon juice so that they do not turn brown.
Place some caramel in the pastry shells.
Layer the sliced bananas over the caramel.
Pipe the whipped cream on each pie.
Grate some chocolate on top of the cream.
Chill before serving. 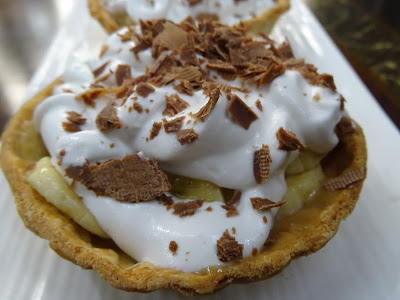 If you prefer using more chocolate, you could scatter grated chocolate on top of the bananas too. And then again another generous scattering on top of the cream.
It was worth baking the pastry shells. They were light and crisp and it was such a pleasure to dig into this lovely dessert.:)

If you like the taste of coffee, you could sprinkle some instant coffee powder on the banana slices. And some on the cream as well.