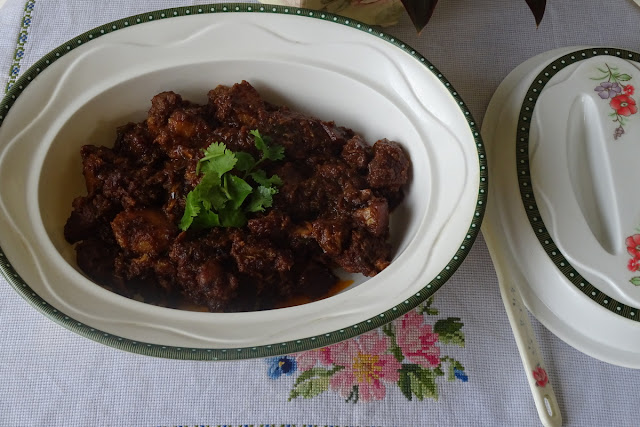 There are some dishes that you fall in love with even without getting to taste them. This is the effect rendang had on me when I first saw it on TV. It was on my eternally favourite channel, Fox Life. Since then I have made it a few times, blogged about it once but it’s only now that I used all the ingredients that the recipe asked for. Of course with some minor adaptations here and there.
I had never grown galangal before and my first attempt to grow from them store-bought ones (in Delhi) was not successful. The second time the shoot sprouted fast and I now have a small clump with beautiful foliage flourishing in one of my pots.
I looked up Wiki and here are some facts about rendang:
Rendang is a spicy meat dish which originated from the Minangkabau ethnic group of Indonesia and is now commonly served across the country. One of the characteristic foods of Minangkabau culture, it is served at ceremonial occasions and to honour guests. Rendang is also served among the Malay community in Malaysia, Singapore, Brunei and Southern Philippines. In 2011 an online poll by 35,000 people held by CNN International chose rendang as the No.1 dish of their World’s 50 Most Delicious Foods (Readers’ Pick) list.


Wash the meat and set aside.
Put the soaked chillies, ginger, turmeric, galangal, lemon grass, garlic, and sliced onions in a blender and blitz to a paste adding the water from the soaked chillies.
Roll up the turmeric and lime leaves together and slice them fine.
Toast the dried coconut pieces and grind them using a mortar and pestle.
Heat the oil in a pan. When it comes to smoking point, throw in the star anise and the cinnamon stick.
Then add the ground spices and the chopped leaves. Fry for about 5 minutes then add the meat.
Add the curry powder,the pepper and chilli powder and cook till the oil separates. Add tiny amounts of water in between so that the curry does not catch at the bottom. Season with salt.
Add the ground coconut and continue to cook till the meat is tender. This will take a little more than an hour.
Add the coconut milk and simmer for another 10 minutes. The rendang is now ready to be taken off the flame and served on a platter.
Garnish with coriander leaves. This goes best with rice. 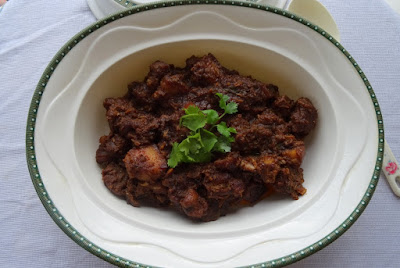 Although I have cooked rendang before, I did not have all the ingredients at hand. But now I have galangal and lemon grass in my potted garden. Other ingredients that I could use from my garden are turmeric and lime leaves as well as the two coconuts. One that dried in the shell and the other which was fresh. I grated the latter to extract the milk. This is a curry that has a wonderful heavenly taste and so very fragrant. When I first cooked it I thought that the spices would be a little overpowering. But adding the coconut milk balances the taste so beautifully. It becomes perfect! I’m likely to cook rendang in a bigger quantity the next time we have guests over.