Some of the tastiest foods in the world come with a tag- acquired taste. As the name suggests the smell is very strong but the taste is good and it is considered a delicacy in our region. Stinky beans are also found all across South-east Asia but I have yet to prepare the cuisine of other cultures. Hopefully, I’ll get there. Indonesia, Thailand, Malaysia, Singapore, Laos, Myanmar are the countries where stinky beans grow. In our country, they flourish in our region, the North-East.

I had four stinky beans that weren’t all that fresh. They were with mature seeds. We also like to have them when they are tender with the seeds in their nascent stage. In that case the outermost skin is scraped off and the beans are chopped into pieces before being cooked. Stinky beans grow in medium-sized trees. They are also known as twisted cluster beans. They belong to the genus Parkia in the Fabaceae family. This is what I got online about the benefits of stinky beans.
It is a good source of minerals and is especially high in calcium, phosphorous, potassium and iron. It is high in fibre and contains considerable amounts of Vitamin C and E as well as Vitamins A, B1, B2 and B3. Stinky beans have been used in folk medicine to treat diabetes, hypertension, liver disease, and kidney disorders. Source.

With the mature beans, they are roasted on an open flame till the outermost skin can be easily removed. The flesh and the seeds are separated. The seeds come in a casing that has to be removed with the help of a knife. Later the seeds can be left whole or chopped up as shown in the picture below. That takes a bit of time but the end result is definitely worth it.

Prepare the beans as described above.
Heat about 1 cup of water and boil the seeds till almost done.
Add the chillies after twisting and breaking them into smaller pieces.
After 10 minutes or so, the seeds will become softer.
Add the soda bicarb and lower the flame for a few minutes so that the chutney will not boil over and spill.
Add the salt and the fermented fish.
Then add the soft flesh of the beans that were set aside earlier.
Cook for a couple of minutes till the dish is almost dry.
Remove from the flame and mash with the back of a ladle.
Transfer to a serving bowl and scatter the chopped herbs.
Both coriander and serrated coriander work well here but today I used chopped spring onions. 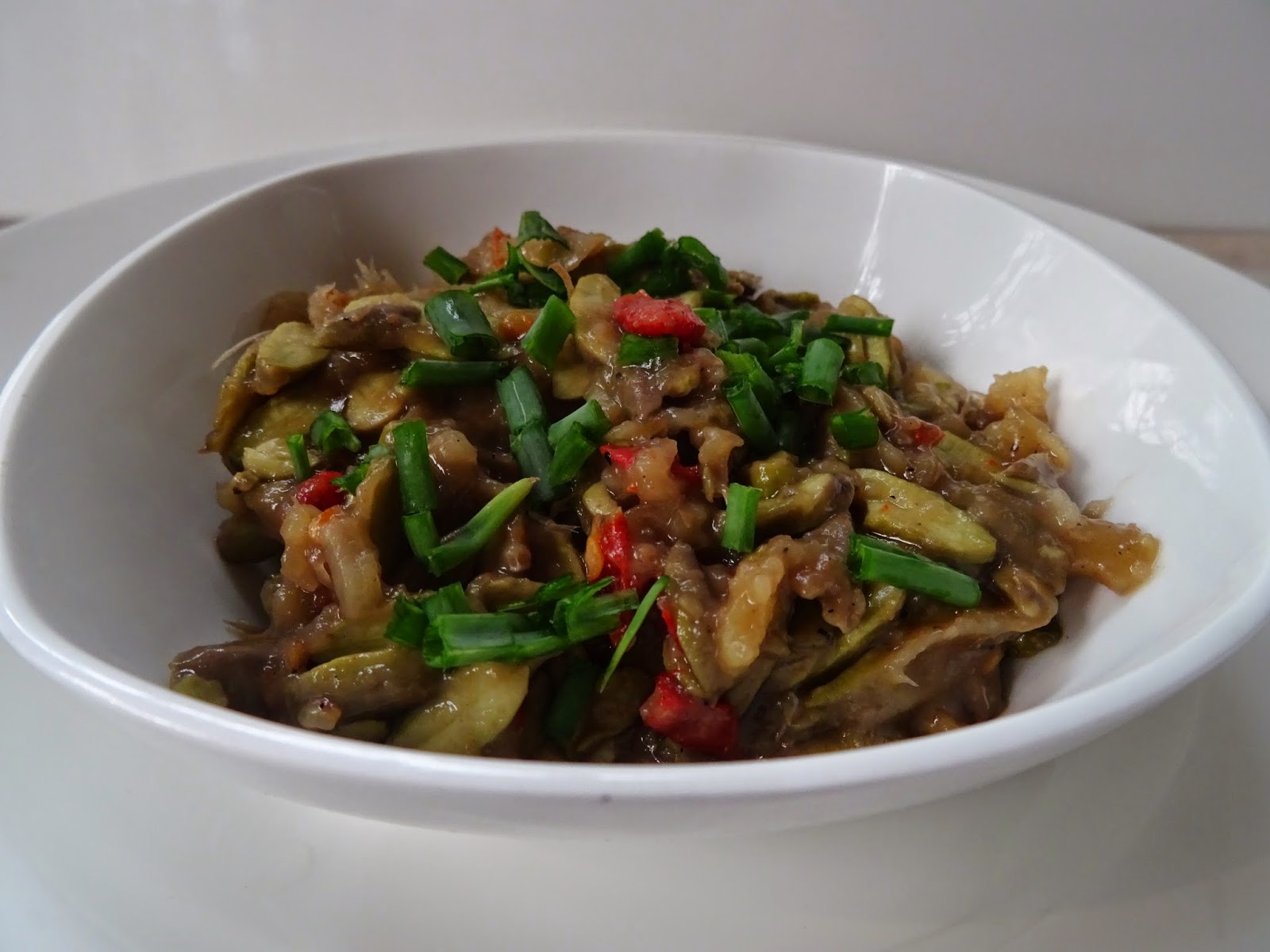 Finely sliced onions can also be added to this dish. They can be added raw with the herbs or cooked. Another variation of making this dish is to boil the beans first till well cooked. The chillies and fermented fish can be roasted separately and everything can be mashed together with salt and a pinch of soda bicarbonate.
Dried seeds are black but they can be stored and used when the season of fresh beans is over.