Apple Pie With A Leafy Crust!

One of my favourite pies to bake is…apple pie! I have done quite a few posts here on my blog with just apples or teamed them with other fruits like pears and star fruits. Usually I make it with a lattice top but this time I decided to add some vines and leaves.:) The idea came from Ms. Google. I was going through pie crust images and came across one that was so beautifully done.
I decided to go with leaves since I am in a bit of a hurry as we are leaving for the neighbouring state of Nagaland for the Hornbill Festival. It’s one of the biggest festivals in our region and it’ll be a first time for me there. Coming back to the pie, I’ll get on with the recipe.
For the pastry:
100 grams butter, chilled
200 grams all-purpose flour, sieved
1 egg
Keep a small bowl of cold water to sprinkle on the dough
Transfer the flour into a large bowl and grate the butter on top of the flour.
Mix with your finger tips till it resembles breadcrumbs.
Break the egg and add to the mixture. Sprinkle some cold water at this point.
Bring the mixture together. Divide it into two, shape into discs, wrap in clingfilm, and chill for at least 40 minutes.

The filling:
4 medium apples, peeled, cored and diced
The juice of one small orange (all the juice will not be needed)
A quarter tsp grated orange rind
A handful of raisins, washed and patted dry with a kitchen towel
Sugar to taste
A quarter tsp cinnamon powder
1 tsp vanilla extract
2 tsp flour
1 egg yolk for the eggwash

As the pastry chills, mix the cut apples with the orange juice so that they do not turn brown. I usually add lemon juice but it’s the season of oranges….
Add the grated orange rind, the cinnamon, the vanilla extract, the raisins, sugar and the flour. Give it a good mix and set aside.
Roll out one disc of the pastry dough by skimming a fine dusting of flour on your worktop and line the loose-bottomed pie tin. Run the rolling pin along the edge of the tin to remove any extra dough. That can go back to the fridge to be taken out a little later for more ‘leaves’.
Prick the rolled-out pastry with a fork and chill it as you work on the other disc.
Roll out the other disc and using a cutter, cut out as many leaves as you think you’ll need. Work as fast as you can. 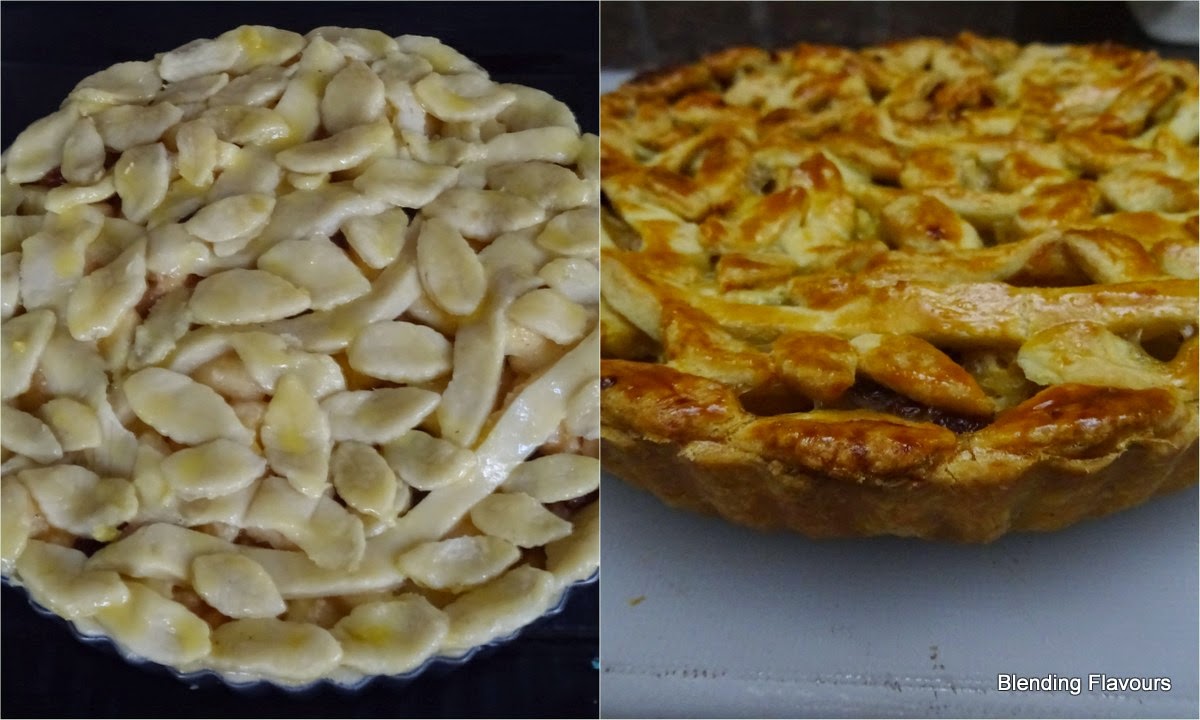 Take the rolled out dough from the fridge (the bottom portion) and place the prepared filling in it.
Even out the surface with a spoon.
Arrange the leaves in a circle all across the circumference of the pie by adding a bit of the egg yolk. Cut off a few strips and make some curves. Add to the crust creating a pattern that you like.Keep on adding more leaves (with a little help from the yolk) till most of the surface is covered.
Brush with egg yolk and bake in a preheated oven till the pie is golden brown. I baked this pie for 40 minutes at 200C for the first 15 minutes and then at 180C till it was done.
This time I did not use extra butter to grease the pie tin. There’s enough butter in the dough and the pie came off (the tin) effortlessly. The amount of sugar I used wasn’t much. I do taste the filling to see if it’s (sweet) enough. There’s no sugar added to the pastry as I’m happy with the hint of sweetness from the filling. The freshness of citrus comes through as you bite into it. It’s refreshing! Carrying this on our journey. I must sign off now and do some packing…