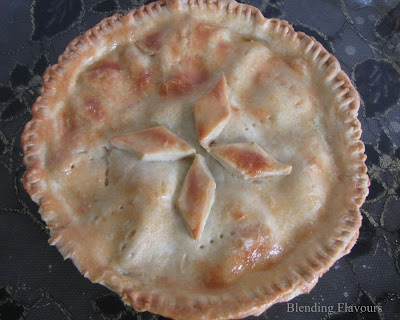 It’s been a week since we got back from Bhutan and I’m still happily cooking/baking with precious Bhutanese ingredients. A pear pie was what I made the other day. The fruits, bought at the Farmer’s Market in Thimphu were sweet and juicy and so pie it was. I have often mentioned about the fruits from our region being acidic and not the best filling for pies.

Sieve the flour in a large  bowl. Cut the  butter into cubes and add to the flour. I chill it earlier after making the cubes. Using both hands, mix with the fingers until the mixture looks like breadcrumbs. Add the sugar. Break an egg into the mixture. Mix. Sprinkle some chilled water and bring the dough together without kneading. Lightly flatten the pastry dough and put in in the fridge wrapped in cling-film. Chill for at least thirty minutes. It’s good to divide the dough into two portions as one portion will be used later than the other.
The rest of the ingredients:
4 pears
Sugar
Cinnamon powder
Lemon juice
1 egg for the eggwash
Peel the pears. Cut and core them. The slices should be even and not too thin. Squeeze half a lemon on the sliced fruit to prevent them from going brown. Add some sugar and mix.
Take out the dough from the fridge and roll out a little bigger than the size of the pie dish. Prick all over with a fork. Sprinkle some cookie crumbs on the pastry to prevent the pastry from becoming soggy. Alternately you can mix some flour into the pear mixture before you place the slices on the rolled out dough. If necessary add some more sugar to the fruit, sprinkle some cinnamon powder, give it a good mix, then place the slices in a circular pattern.
Take out the other portion of the dough, roll out and cover the pie with it. Cut out the overhanging extra dough and crimp the edges. Press with a fork on the edge of the pie to create a pattern and also prick with the fork in a few places on the covering. The pie can be decorated with floral, geometrical or leaf patterns before it’s baked. Break and beat an egg. Brush with egg all across the pie cover and bake in a 180* oven till it turns golden brown. This should take about 25 to 30 minutes. Cool, cut into wedges and serve with dollops of cream or vanilla ice-cream.

Thank you for stopping by. Blending Flavours is on Facebook…hope you visit and Like my page!