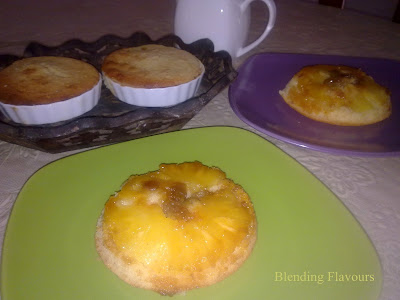 Since I still had a small pineapple left ( after making the murabba in my last post) I thought about using it in a dessert cake. And what better than a pineapple upside down cake? A large cake would simply sit in the fridge so I decided to make a few small ones, just right for individual servings. I used the small tart moulds where the pineapple rings sat comfortably.

Caramelize 3 heaped tablespoons of sugar, add some dots of butter, then divide the brown deliciousness between the moulds. I used four of 4 inch moulds. Peel the fruit and remove the ‘eyes’. Cut into rings, remove the inner core and place one pineapple ring on each mould. It’s good to reserve some of the juice that flows when you cut/slice the fruit. It can always be added to the cake mix later. There were no cherries but I had some rum-soaked raisins and a few went in the middle where the hard core of the fruit had been removed. I also added a teaspoon of honey to each mould. If you love honey, you’ll understand…

Sieve 130 grams of flour with a level teaspoon of baking powder. Beat two eggs with a teaspoon of vanilla essence. Cream 80 grams of butter (at room temperature) with the same amount of fine sugar. Gradually add the beaten eggs, then fold in the flour. At this point I added some of the juice of the pineapple that I had kept aside. Divide the mixture into the prepared moulds and bake at 175*C for 25 minutes or till a toothpick inserted comes out clean. Some of the mix was left over so it was divided between two muffin cases. Let the cakes cool down before you turn them out upside down on a serving plate.

The cakes were moist and tasted good. We had them with dollops of vanilla ice-cream.

Thank you for stopping by today. Blending Flavours is on Facebook. I hope you’ll visit and Like my page!