One variety of gourd available during the summer months is the teasle gourd. We love its mild taste and the fact that it can be cooked in a variety of ways makes it popular. It’s a climber with tuberous roots. The roots are usually on sale during January/February so that they can be planted before the year’s first rains come. That is when the shoots make their first appearance. By May and well up to August these gourds can be consumed. The tender leaves are also edible. Sometimes I add the leaves to fried potatoes or to paneer dishes. It does taste somewhat like spinach. 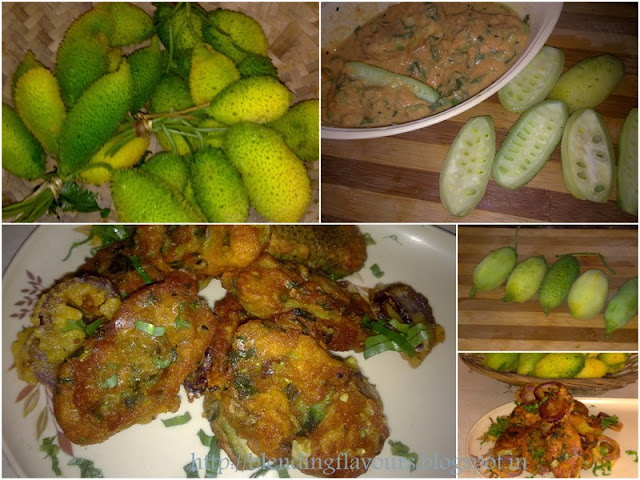 The most common ways of cooking the teasle gourd is to chop them fine and fry them. The tender ones can be halved and cooked in dal. We also like to add them to fish curries and in mixed vegetable sabzi. These are also stuffed with potatoes or some other filling and fried in batter. In Dimasa, it is called hangathai. Apart from cooking all the above ways mentioned, we also make them into a chutney with fermented fish, hot chillies, onions, and herbs.


Today I fried them in batter without stuffing them. It’s a simple form of cooking but still delicious. Although this vegetable is also known as the Spiny gourd, the “spines” are tender and can be left on. But most cooks prefer the cleaner look and scrape away the spines. I boiled the veggies till they were nearly done. They should still be firm after they are removed from the water. Then I cooled and halved them. The batter was made of chickpea flour to which I added a teaspoon of grated ginger/onion/green chillies. The rest of the ingredients that went in are salt, nigella seeds (less than a quarter teaspoon), a pinch of turmeric, some red chilli powder, cumin and coriander powder, and finely chopped serrated coriander.

The boiled and halved gourds were dipped in the batter and fried till they turned brown on both sides. With the little batter that remained I used it up by chopping two onions and fried the onion rings. More chopped coriander (serrated) were generously scattered over the fried gourds.


To make stuffed gourds, the innards are scooped out after boiling them. A prepared filling of your choice can be put in the shells, dipped in batter and fried. Adding a bit of rice flour to the batter makes them crispier. The scooped out flesh can also be added to the filling or they can be added to other vegetable dishes that you prepare.