A Vegetable Pie & A Failed Tart

Today’s pie was inspired by The Good Cook’s recipe of a cheese and onion pie. I ended up using more ingredients than cheese and onions but ever since I saw that show it was at the back of my mind. More so because he talked about his childhood and the smell of his mother’s baking (this particular pie). No matter how old one may grow, food fragrances from childhood remain forever.I have mentioned before that I started baking pies and tarts rather late but now I’m comfortable about clubbing ingredients together rather than think about how the combo will turn out.. And since Simon Hopkinson makes everything look so UN-complicated, his recipes are worth trying out. 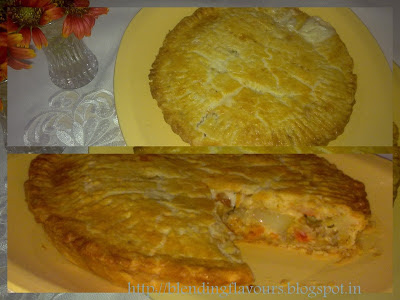 Looking at these photos, I’m tempted to say, don’t judge a book…..!! But it was actually delicious! Whenever I make some pastry dough I always make some extra so that I can keep a (pastry) shell or two in the fridge. The filling that went in are:-

All the ingredients were mixed and placed in the shell. The cheese slices were layered between the veggies. I rolled out the pastry top, made the patterns with a fork and pricked a few times in the middle of the cover. A light brushing of egg and it was ready to go into a preheated 180 C oven. After thirty minutes it was cooked and the browning was even. We had it during tea-time and it was still slightly warm. 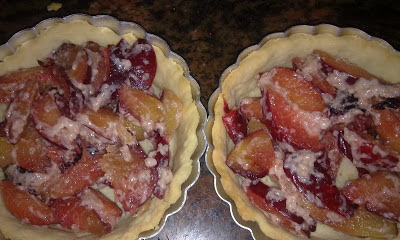 Plums are now in season and since they are only slightly tart and mostly sweet. After tasting them I thought I’d make a few plum crumble tarts. This picture was taken before the crumble topping went in. It was a mistake that I learnt the hard, time-consuming way. It would have been different if the plums came from a thousand miles away, in the cooler parts of our country where cherries, almonds and apricots grow.:) Baking made them more acidic that I now know I’ll never be using them in my baking. They’re only good for chutneys, jam and sauces. Most fruits in our region are very acidic. They turn sweet only when they are overly ripe and about to fall off the tree. No wonder fallen fruit tastes so much sweeter!