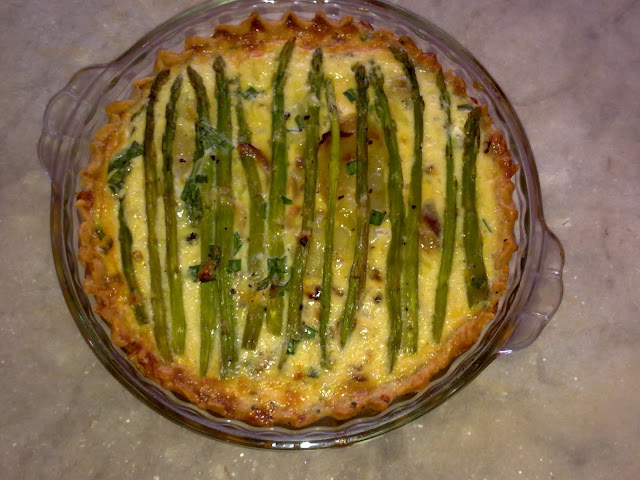 Last week I wanted to use up the asparagus in the fridge and I thought a quiche would be nice. The asparagus was bought in Delhi (where I had spent some time recently) and was no longer fresh. I had seen some photos online and the idea of a quiche with asparagus was on my mind. Also I never thought about crimping the dough but as I was about to blind-bake it, the power went off!! Not really wanting to start with the clean-up before the quiche was actually in the oven, I crimped the edges. You can see in the collage below that I’ve also used a bit of grated pepper in the pastry dough.

I’ve never made a quiche without meat in some form or other. Bacon, salami, sausages, smoked meat, left-over chicken from curry– all have gone into my quiches. Since I wanted to use up the Cheddar too, I combined all these ingredients together and it did turn out good!! 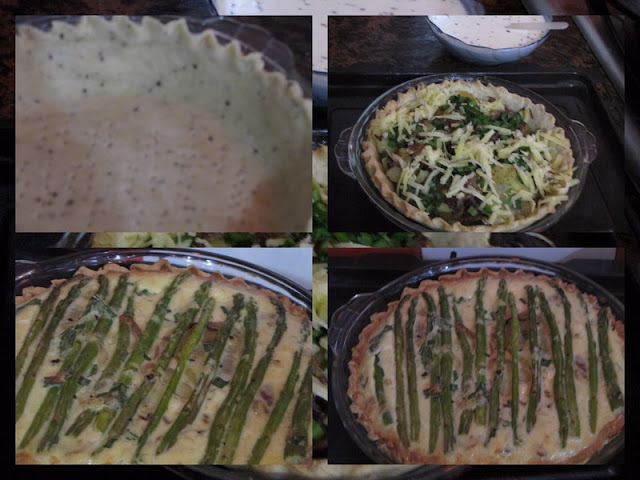 Sieve the flour in a large bowl. Add the butter and mix till it resembles breadcrumbs. Then add the grated pepper. Break the egg into the mixture and bring it together. The iced water, about two teaspoons can be added now. With water I like to keep it to a bare minimum. As soon as it evaporates, the pastry shrinks. Once the dough comes together, make a ball, flatten it and wrap it in clingfilm. Chill for at least an hour.

Grease the baking dish then roll  out the pastry on a floured board, a little bigger than the size of the baking dish. Place the pastry on the dish and cut out any extra that hangs from the dish. You could also use a rolling pin to remove the extra dough. Prick all over with a fork.

Cut out some aluminium foil a little bigger than the size of the baking dish. Grease it and place the greased portion down on the pastry. Fill it with baking beans and bake in a pre-heated oven at 180 degrees C for fifteen minutes. Remove the foil and the beans and brush the pastry with egg so that the bottom does not turn soggy. (The eggs that are to be used for the filling can be kept aside till this point). Bake for another fifteen minutes or so till it turns golden brown.

Let the shell cool down a bit before you add the filling. Start with the potatoes and add a generous amount of pepper. Scatter some of the cheese on top of the potatoes. Beat the eggs and add cream to it. Then add the remaining cheese. The chopped chives can also go in now. Season with a dash of pepper and a pinch of salt. Pour the mixture on top of the potatoes. I usually pour half of the filling before putting the dish in the oven. There’s less chance of spillage if the rest is poured after it’s inside the oven. Place the asparagus on the top of the quiche and bake in a 180* C oven for thirty minutes. Serve at room temperature. I feel quiches taste so much better the next day. What do you say?