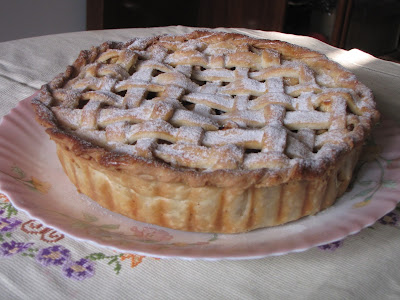 Pastry was something I had not tried or I had kept putting off for a long time. I think I was more used to the dough of  our Indian flat-breads that needed to be rested only for a short while. So the process of chilling/resting and then baking blind, the baking beans, all seemed pretty tedious to me. But since all the major food channels made it seem like a breeze, I thought I’d give it a go. Once I did that I was hooked! No it wasn’t smooth sailing initially but the taste and the beauty of the end result (even if I say so myself) was worth every failure (with a small f) and effort. In our parts, not every household is into pastry making. I started with rustic pies, then proceeded to tartlets and quiches. I love the idea of using different fruits and vegetables in sweet and savoury pies much as we use them (the veggies) in our stuffed parathas.
I use a lot of fruit in baking. Unlike the bigger cities in our country, we don’t have speciality shops where everything is available. Even with fruit, our choices are limited. I’m talking about fruits that are generally used in baking. Most of the acidic fruits available in our region are more suited for pickling and for sweet and sour chutneys.But with Indian online stores that come up with the frozen ones, there’s a silver lining…The other day I made an apple pie. There were quite a few apples in the fridge. Apples come either from the states of Himachal or Kashmir but we don’t get cooking apples as such in our markets. So I use the regular ones from the local fruit market. 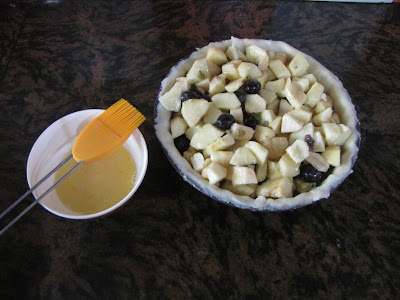 This time I used orange juice instead of lemon, on the diced apples. The other ingredients that went in were: sugar, some cinnamon powder, a handful of raisins, and since I had some sweet purple grapes, in they went too. About a dozen of them. I love making the lattice, it’s not the finest but love it anyway. Since there was a bit of dough left, I didn’t end with just crimping the edges but I made a rope-like pattern on the border. 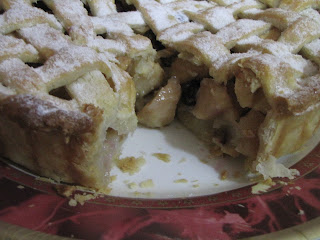 The taste was lovely and although the sugar dusting seemed thick, it didn’t matter because there wasn’t much sweetness in the apple/grape mixture. Another reason not to feel so guilty after all. With age, the thought of cutting down on sugar simply hovers at the back of the mind. But as long as I don’t indulge in food that isn’t overly sweet, at least I am doing something about it.:) And as I type this the thought of purslane sprouting between the bricks in my front-yard brings to mind another recipe. Maybe teamed with spinach and other greens that I might be able to forage in the spinach patch itself might result in a delicious quiche!