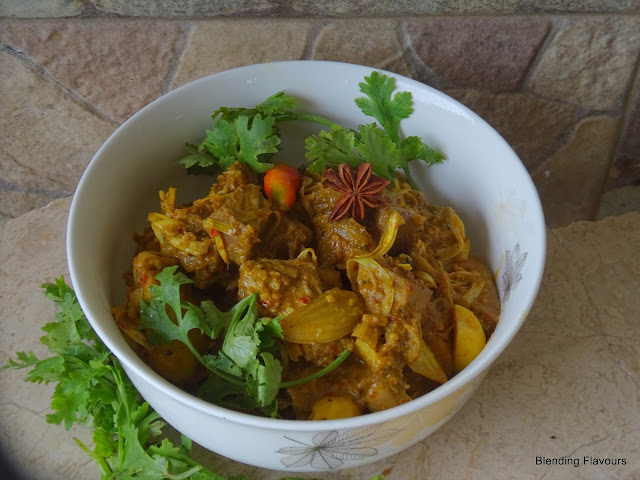 One of the best curries in the world is, no doubt, rendang. I have used chicken, pork and mutton on separate occasions for this dish. But yesterday I used unripe jackfruit for rendang.
Ingredients:
700 grams jackfruit
1 star anise
1-2 tejpatta
1 stick cinnamon broken into two (I had to make do with cinnamon powder as I realized I had run out of cinnamon sticks)
10 dried chillies, soaked
4 medium onions, peeled and sliced
3 cm piece galangal, chopped
1 lemon grass stalk, finely chopped
1 thumb-size piece of ginger, peeled and chopped
7-8 garlic cloves
3 tbs vegetable oil
1 tsp turmeric powder
1 tender turmeric leaf
6-7 lime leaves 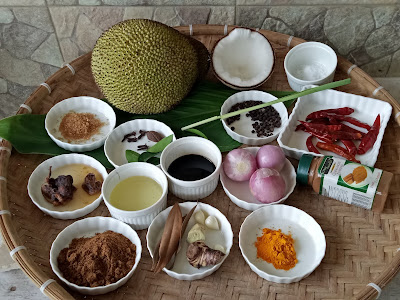 With jackfruit, cutting it is a little messy. I prefer to use a banana leaf to do the needful by placing it on my work top. It is easier to scoop up the discarded portions later. Newspapers can be used instead of banana leaves. Since the fruit oozes a gummy latex when cut, it is best to oil your hands and even your knife. The hard portion right in the middle needs to be removed and the thick rind peeled. Then the fruit is cut into bite-size pieces and boiled till half-done.
Here are some facts from Wiki. 100 grams of raw jackfruit provides about 95 calories and is a good source of antioxidant vitamin C. Jackfruit seeds are rich in protein. The fruit is also rich in vitamin B6, potassium, calcium, and iron.
Method:

There will be many variations to this dish. After all it is cooked in wide geographical region. Every time I make rendang, I feel that the spices are a bit too much. But adding coconut and coconut milk in the end balances out everything so beautifully. I like it best with rice.
Other rendang recipes on my blog:
Pork rendang
Chicken rendang