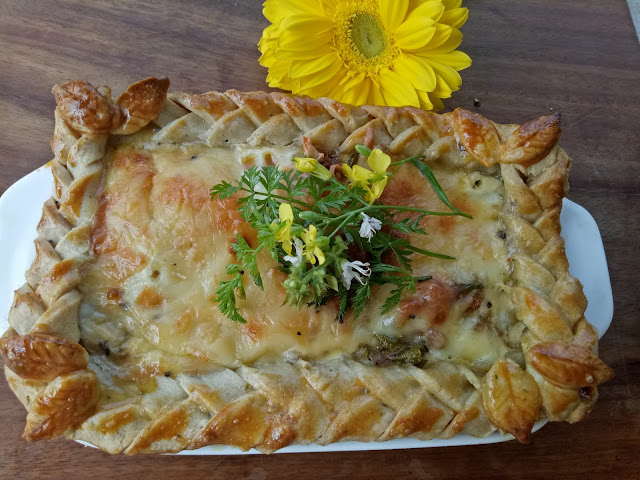 Not a quiche again!! I know. I know! But it’s the first day of March and I wanted to try out something new regarding quiches. I had been reading up on coconut oil crusts and I had wanted to make one. But the dough didn’t really come together. Maybe it was the use of whole-wheat flour along with all-purpose flour. Or maybe it was something else. So I went ahead with the usual chilled butter routine to which I added half and half of the two kinds of flours mentioned above.
The result was a crisp crust and wonderful to dig in to. to the dough I added a dash of ground pepper and instead of binding it with egg, I used chilled water only. For the salad, I grabbed whatever I could from my pots including basil and brassica blooms. The pairing worked well. And it feels good to start a new  month with something that’s easy to make and comforting to eat! 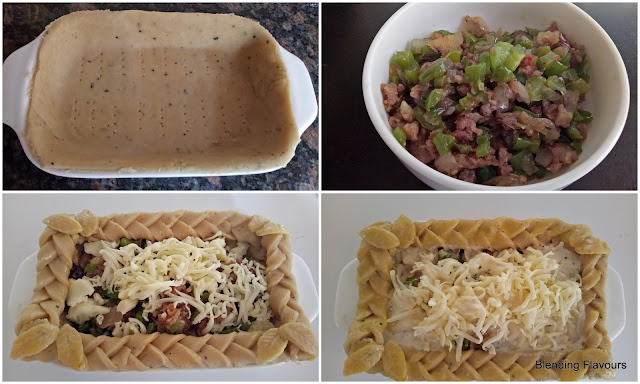 Mix the two flours in a bowl and add the butter. Rub the butter in the flour using your fingertips until the mixture is crumbly. Sprinkle the chilled water and bring the dough together. Wrap in clingfilm and chill for at least 40 minutes.
Take it out and cut in half. Put the other half back in the fridge. Roll out the dough on a surface with a slight dusting of flour. Then place it in a greased tin and refrigerate it as you work on the filling.

Heat a pan and add the oil. Throw in the onions and fry till they turn translucent. Add the capsicum. Remove the casings of the sausages and crumble them into chunks. Add the chunks to the pan. Season with a bit of salt and pepper. Go easy on the salt because of the cheese that’s to be added later.

Preheat the oven to 180C. Take out the tin with the pastry from the fridge. Place a piece of foil or parchment paper with the greased side touching the pastry. This makes it easy to remove the paper and the beans. Place the baking beans and bake for ten minutes.
After 10 minutes, remove the paper and beans. Brush the surface with egg and bake again for another ten minutes.
Remove and let it cool down as you work on the braids for the border.

Take out the remaining chilled dough from the fridge and roll out narrow rectangular shapes a little longer than the length of your baking dish. Work quickly as it becomes difficult to plait if the dough is not cold. Cut three thin strips and start braiding. I made 2 separate sets and cut out 2 leaf patterns for the corners. I didn’t want the ‘joining’ areas to look messy so I hid them with the leaves.:)
Place the braids on the borders of the blind-baked shell with the use of egg yolk as a binder. Stick the leaves in the corners with egg. Put the onion/sausage/onion mixture in the shell. Mix the eggs with some cream and ground pepper. Pour it on top of the filling. Then scatter the grated cheese on top. Brush the braided edge and the leaf cut-outs with egg yolk and bake for about 30 minutes.
If you feel that the edges are darkening a bit too much, place a piece of foil about 10 minutes before the quiche comes out of the oven. 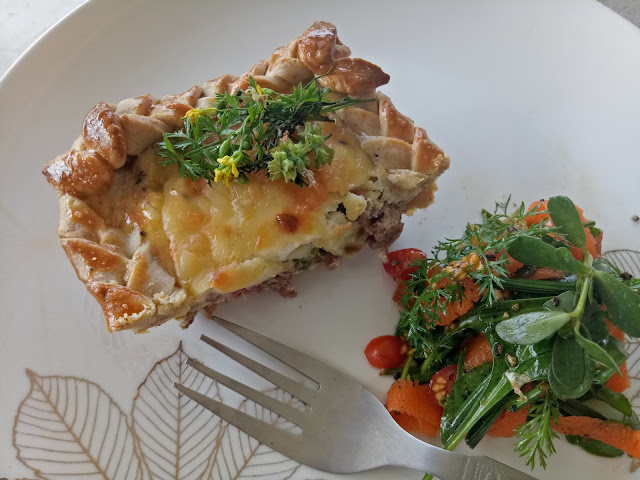 I had never used whole-wheat flour for a quiche. This was buttery and oh-so-crisp! I loved every bite! I teamed it up with a salad that I made in a jiffy. From my pots I grabbed a little bit of each:
Carrot tops
Purslane
Onion leaves
Garlic leaves
Basil blooms
Brassica blooms
Cherry tomatoes
Baby spinach
And from the fridge, a small carrot.
The dressing was made with a mix of honey, salt, ground pepper and apple cider vinegar.
I didn’t measure the cream as I added just a little bit. Moreover the baking dish I used was small. Its breadth is 4″ and length is 6″. About 2 spoonfuls of the sausage/capsicum mix also remained. But the flavour of the sausages made the quiche even more delicious. Happy March everyone!