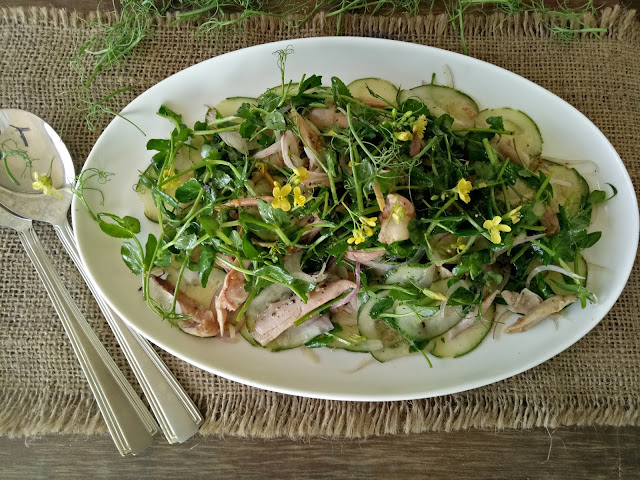 If I am sitting down and enjoying this with a little more gusto than I usually do, it is for a very good reason. My kind of small space gardening was never about competing with the birds. But since last year the sparrow population in our area has grown by leaps and bounds. Any seed that sprouts becomes food to an army of these tiny birds. Looks like now I’ll have to stick to plants that the sparrows wouldn’t dream of pecking. And those include tomatoes, beans, chillies, carrots and herbs. I have been looking forward to making this salad. Anything home-grown is so much better. But first I needed to protect the seeds/shoots. 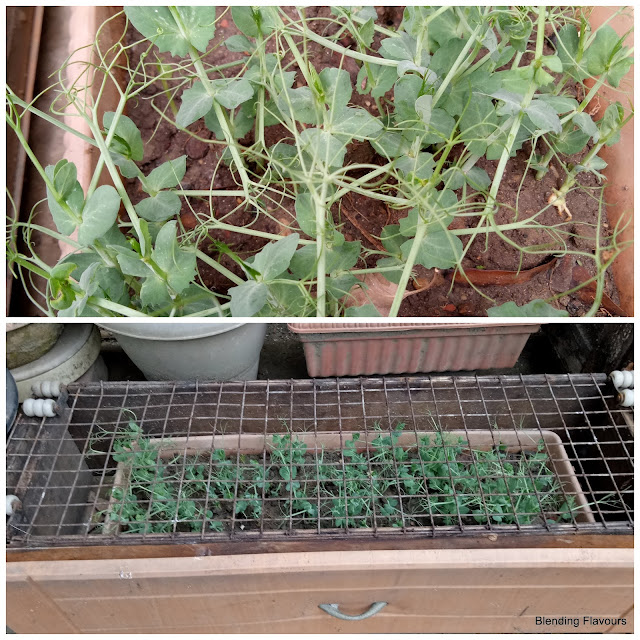 I sowed the peas in the first week of this month. An old kitchen drawer was turned upside down and that became a good protection from the sparrows. After about fifteen days, the shoots were ready to be picked. There’s some wire mesh lying in our shed. Some more protective cover should be made soon…
Pea shoots are a wonderful source of antioxidants, phytonutrients, enzymes, minerals and vitamins. For more on the nutritive value of pea shoots do check out this site.

I removed most of the ‘tendrils’ from the shoots before making the salad. The ginger I used is a variety of ginger locally known as Moran ginger. Grown in the Moran area of Assam, it is pungent and has more zing than regular ginger. You can see from the picture that the skin has a reddish tinge. This was given to me by a friend two years ago. Since then it has flourished survived in one corner of my backyard. 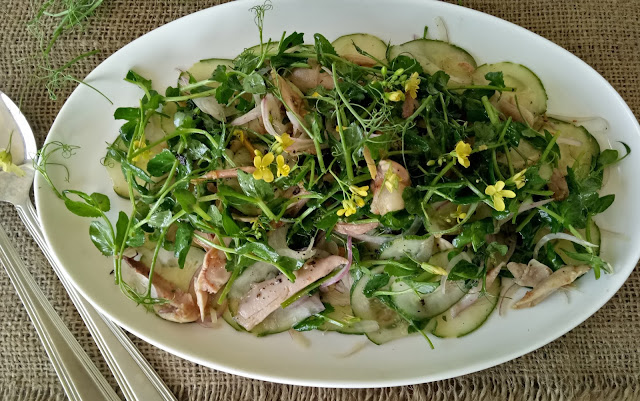 For this salad, if I had simply drizzled the dressing over the ingredients, it would not have tasted good. I made the dressing and used more than half of it to mix the ingredients really well with a fork. Then the cucumber slices were placed on the edge of the platter and the middle portion was piled up with the chicken, onions and the shoots. The tiny yellow blooms were placed last. The remaining dressing was drizzled on the salad.
I did not use exact measurements while making the dressing. The chicken was well-seasoned so I went easy on the salt and pepper. This is a wonderful salad and the taste is just out of this world. I did toy with the idea of adding more colour to the dish by using roasted beets but didn’t go ahead with it. It didn’t really matter. A forkful of this confirmed it.:)