Cauliflower Baked Upside Down With A Fish Filling

One of my recent posts had a cauliflower that was baked in white sauce. With cauliflowers in season now, they are made so often. One thing about seasonal delights is that you want to make the most of them and team them up with everything possible in recipes. A cauliflower baked whole is a constant feature on my winter table. And when one mentions cauliflower, other winter vegetables that instantly spring to mind are: peas, hyacinth beans, radishes, lai (a variety of brassica) and broccoli. Elders often mention the fact that vegetables bathed in dew taste so much better.

For this recipe, I used a cauliflower that was on the smaller side. It weighed 360 grams. After the stalk and leaves were removed, I washed it and blanched it in a pan of boiling salted water. It remained there for about 5 minutes on one side and for a few more minutes on the other side. A knife inserted in the centre offered some resistance but that was all right as the baking would take  care of that.

Instead of using just the white sauce, I used two fish fillets. I had some boal fish/helicopter catfish and it’s easy to discard the bones from this kind of fish. Then they were lightly mashed. This was from a recipe I had seen in a cookery book years ago. The recipe had minced lamb but I thought fish would be a nice version. As it is, teaming up cauliflower with fish in a curry is a favourite recipe in our region. And using the same combination in a baked recipe should surely taste good!

The fish fillets were cooked in very little water. Just enough for the skin to come off easily and the bones to be discarded. The weight of the fillets was 160 grams. To this I added a large onion which was peeled, chopped and fried with a touch of salt and pepper. For the sauce, I made it the same way as in my other cauliflower post.

Grease the baking pan with butter and pour a ladle-ful of the sauce. Put the blanched cauliflower upside down. Take spoonfuls of the fish/onion mixture in the spaces between the florets. Since the vegetable is upside down, there is more space for any kind of filling to ‘cling’ to. Gently prise open the space where two florets meet and add the filling. Then pour the sauce on top, add grated cheese and dot the vegetable with butter. Bake in a preheated oven at 180C for about 30 minutes or till the cheese turns golden on top. 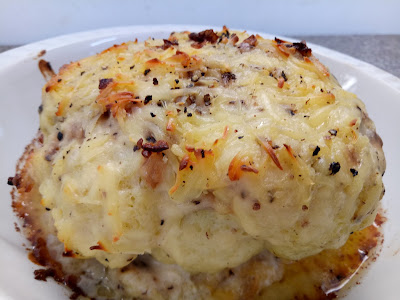 This is a lovely side dish that goes so well with either rice or rotis.