With all the gorging that happened in the last week of last month, I am including more helpings of salads in my meals. With the micro greens, it’s a tussle between the sparrows and I. This year the pecking is frenzied and I wish they hadn’t developed a taste for brassica!;)
Whereas the sparrow population in many parts of the world has been greatly reduced, they are doing very well in our area. But I wish they would leave my newly-sprouted plants alone! Coming to the salad, can anything with beets look anything other than gorgeous??
The idea was to use up the beets and a bit of labneh but I remembered the jar of dried cranberries so those got added too. Labneh is something that I make quite often because I like to slather that creaminess on my rotis and parathas. 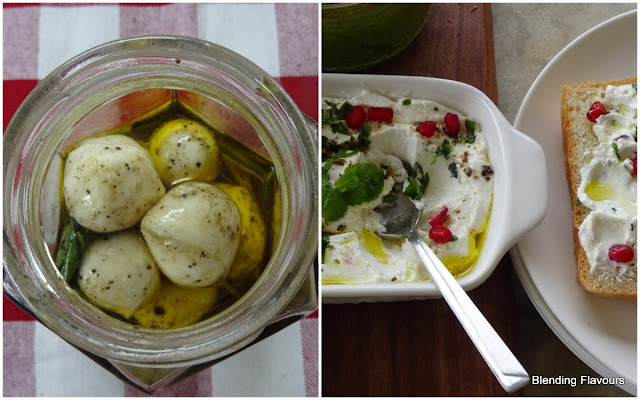 Here’s a collage from my earlier posts. And a link to the recipe http://blendingflavours.blogspot.in/2013/10/labneh.html

Ingredients:
2 beets, roasted in the oven for about 45 minutes
A mix of greens
8-9 balls of labneh
A handful of dried cranberries
Roasted almonds
Roasted walnuts
For the dressing:
2 tbs lemon juice
1 tbs honey
A touch of salt
Sugar to taste
1 tsp freshly ground black pepper
Extra virgin olive oil ( I used the oil where the labneh balls were dunked in)

Method:
Peel the beets and slice them into thin roundels. I used a mandolin slicer.
Arrange them on a platter and pour a bit of the dressing over them. I prefer to do this with beets as it tends to get messy if you mix them with your hands.
Arrange the micro greens on the platter. Do the same with the nuts.
Place the labneh balls all around. Take the dried cranberries and place them on the labneh and scatter the remaining ones on the platter.
Pour the dressing over the salad.
Drizzle with more oil left over in the labneh jar.