Jamun season is almost over. And like every year the splash of purple has been intense!:) Before the season is truly over, the enthusiasm to use more of the fruit in cooking gets heightened. I made jam twice. Half of it will be given away and the other half will be used in desserts. I started with this trifle pudding today. Come to think of it I think I’ll be using the jam in forgiving dishes like this one. Those that do not call for precise measurements. A bit of this and a bit of that can also create magic. 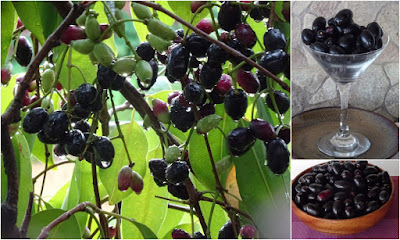 A lot of sharing is done because of the bounteous harvest. Did you know that the seeds are used in traditional healing for diabetes? I have collected (washed and dried) a lot of seeds for a friend whose daughter was diagnosed with diabetes and jamun seeds are part of her diet. 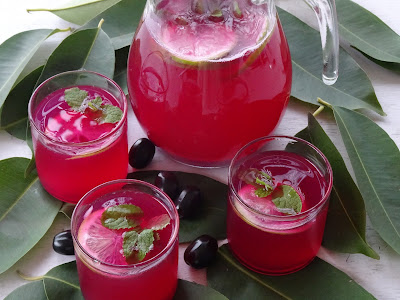 Jamun juice is  most refreshing during these hot and humid days. For my husband who needs to check his sugar intake, I make the juice without the addition of any sweetening agent. For me and my son, it’s a touch of lemon, a dash of black salt, some sugar and some crushed mint. 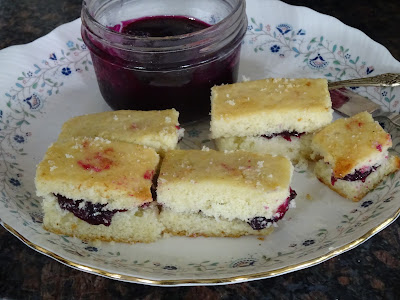 Coming to my recipe, I used a few pieces of sponge cake I had made the other day. The slices were sandwiched with jamun jam. Since it was for two servings in a jar, the ones seen in the photo above were all I used. I placed them in the jar and poured a simple sugar syrup. Then I made some vanilla custard with milk and 2 teaspoons of custard powder. This was cooled and poured into the jar.
For the fruit I used a sweet ripe mango and the the dessert was topped with whipped cream. Since I had some thick jamun pulp in the fridge, I used it to decorate the pudding. 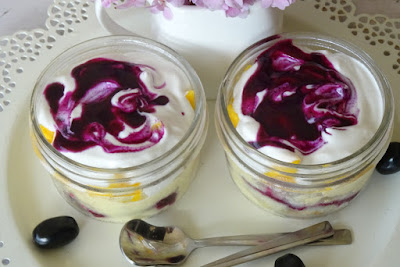 This wasn’t an overly sweet dessert as I added only 1 teaspoon of vanilla sugar in the custard. The cream was not sweetened either. I would love to make more variations later by using up the jam I have made this season.