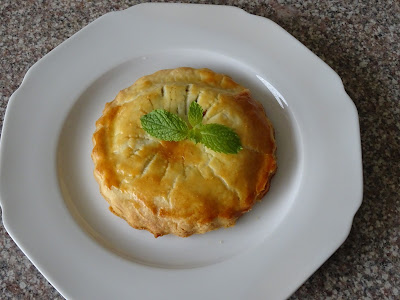 The other night I happened to watch Rachel Khoo’s Kitchen Notebook /Melbourne and that episode had some pretty pineapple pies. I couldn’t wait to get started particularly when all the ingredients were ready and waiting.:)
I had never made cream cheese pastry before and this recipe had cream cheese, flour, a bit of sugar and soft butter. If you are interested in the recipe you can find it here. 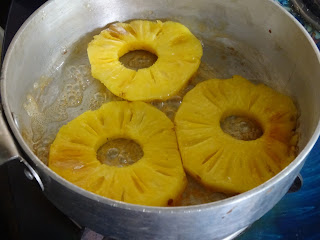 When the pastry was resting in the fridge, I removed the ends of the pineapple, removed ‘eyes’, and sliced them in circles. The core in each circle was removed with the help of a metal bottle lid. 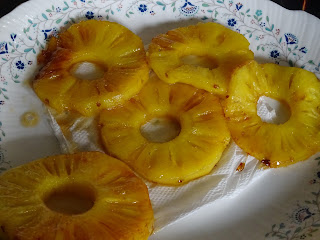 The pineapple slices were dusted with sugar and placed in a hot pan for a couple of minutes on both sides. Then they were placed on a paper-topped plate to remove some of the moisture. 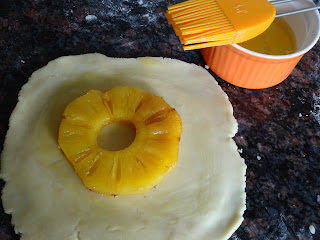 As soon as the caramelised pineapples cooled down, I started working on the pastry. The power situation was bad yesterday and although I rested the pastry for 2 hours, it still felt like it needed some more fridge time. Anyway I got rolling…
I brushed a beaten egg along the circumference of the pineapple and then placed another pastry circle on top. You need to press the pastry lightly to remove any air bubbles. The recipe actually uses a bottle lid to form a flower pattern on the pastry (edge). 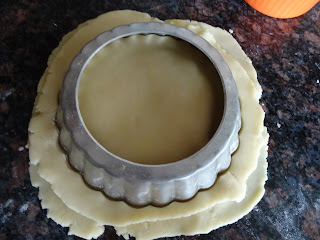 But since I needed to work fast in our humid climate I quickly turned a tart tin upside down and pressed/cut away. 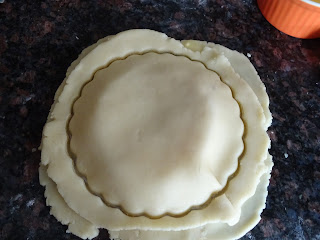 I think this shape isn’t bad at all!:) The trimmings were removed and they went back to rest in the shape of a small ball. 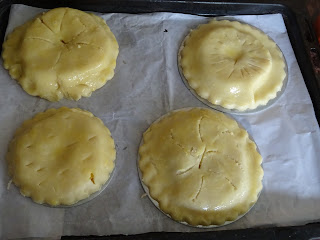 This paper-lined tray has four pies in different shapes. Blame it on the shape of the fruit! The pineapple was small but sweet so I didn’t use as much sugar as the recipe stated. You can see in the picture that this wasn’t the best-behaved pastry!! 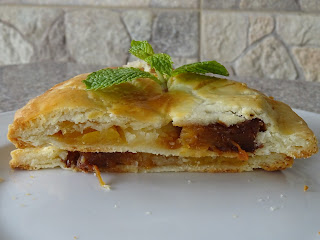 The recipe also had a sugar/cinnamon syrup to be brushed after they came out of the oven. I left that out as I felt that would be too sweet. But biting into the cooled pie was the best thing. Buttery, flaky pastry simply melted in the mouth. Cream cheese pastry? Worth making again. But with an overnight rest keeping in mind the power that goes and comes during this rainy season. And maybe I’ll have some ice cream with it.