The Google community Foodie’s+ challenge for this month was the Croatian Easter bread known as pinca. The bread which is also known as sirnica or pinza is (from Wiki) a traditional Dalmatian, Istrian and Bay of Kotor Easter sweet roll. It is also popular among other parts of Europe such as Slovenia and Italy.
Pinca is eaten to celebrate the end of Lent because it contains many eggs. Along with Easter eggs, pinca has remained the centrepiece of the family breakfast in areas where it is eaten.
I did take part in the challenge on Saturday by baking my first pinca but somehow the texture wasn’t right. But the taste was so good that I baked it again yesterday. I wasn’t part of Foodies+ community till recently but a message from blog friend, Indrani Sen changed all that. The recipe is by Jasmina Brozović. 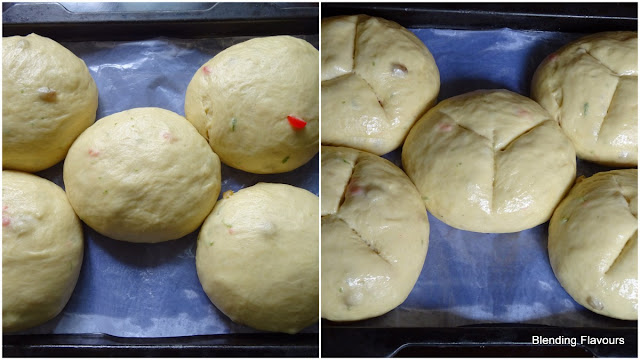 Egg wash:
1 whisked egg
sugar
Preparation:
1. Soak raisins in rum.
2. Sift flour into a bowl. Add salt, sugar and vanilla sugar.
3. Dissolve yeast in warm milk and add to the flour mixture. Add eggs, yolk, sour cream and citrus zest. Then add candied fruit and raisins together with rum. Knead until soft dough forms. Make sure to knead it for about 10 minutes. Cover with clean kitchen towel and let rise in warm place until doubled in size (about 1 hour).
4. Punch the dough and knead it again, adding melted and cooled butter and lard. Cover with clean kitchen towel and let rise in warm place until again doubled in size.
5. Shape the dough into 5 round loafs and place them onto baking sheet covered with parchment paper.  Let them rest for 30 minutes. Using kitchen scissors, cut a cross into the surface of each bun. Brush the surface with whisked egg and let stand for 10 minutes.
6. Preheat oven to 180 C.
7. Bake for 30-35 minutes. While still hot, brush again with whisked egg and sprinkle with sugar.

I did make a few changes. I didn’t have lard and sour cream. My attempt at making sour cream did not happen. It remained exactly like cream even after the addition of buttermilk to cream and left to stand overnight at room temperature. So I used yogurt. Since candied fruit isn’t easily available here, I made do with raisins (a little more than what the recipe stated) and about a dozen candied cherries. And I added an extra egg and felt good about it.:)
The smells that filled the house was amazing. Last time the cuts on the bread were too deep and this time I was so careful that I ended up cutting not deep enough.:( 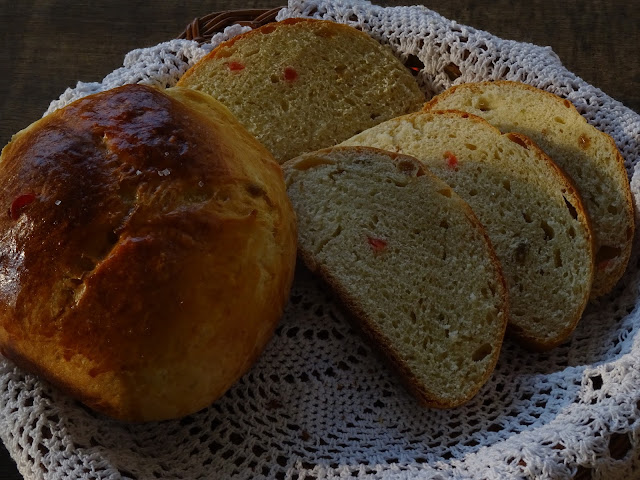 I tasted a piece as soon as the bread had cooled down and I was very happy with it. This is one bread I’ll be baking at regular intervals. It’s wonderful with tea or coffee and even for breakfast. And sometimes, instead of a gift of a cake (I usually do that) I think it will be a pinca that I’ll be carrying with me.