With all the buzz going on about the British Pie Week (7-13 March) I thought it would be apt to bake one today. I did bake a grape pie the other day but the crust didn’t look all that good so I didn’t post it. But seedless black grapes look wonderful and taste even better in a pie. That’s what I found out. Any mention of the word ‘pie’ makes me go weak at the knees.:) Savoury ones…more so. But with strawberries in season, I wanted to use them so it had to be a mix of fruits in the pie. There are many recipes out there using the same in a pie but in my case, it was making use of the meagre harvest that I usually get. And it was more to do with adding flavour than filling up the shell when I first started using them. Just a few of these berries added to apples or other fruits makes a delicious difference. 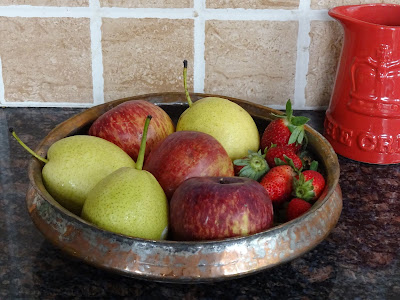 So today, I decided to use pears and apples and a few strawberries. These strawberries are not from my pots.
For the pastry dough:
200 grams flour, sieved
100 grams chilled butter, cubed + a little extra for greasing the tin
1 large egg
Iced water for sprinkling
{Since the weather is getting hot here, I placed the flour and butter in a bowl and put the bowl in the fridge for about an hour}.
Rub the butter into the flour till the mixture resembles coarse breadcrumbs.
Break the egg into the mixture and bring the dough together.
At this point if you feel that the dough needs a little more moisture, sprinkle the iced water and let the dough come together.
Divide the dough into two separate balls. This makes it easier to work on the crust/base as the other half rests in the fridge untouched.
Flatten the balls, wrap them in clingfilm and let them rest for at least 40 minutes.
If I plan beforehand, I usually let the dough rest overnight.
The filling:
2 pears
2 apples
5 strawberries
1/4 cup raisins, wash and pat dry
2 tbs lemon juice
Sugar as per taste
A quarter tsp cinnamon powder
A pinch of freshly grated nutmeg
A sprinkling of ginger powder
A dash of allspice powder
4 tbs all-purpose flour 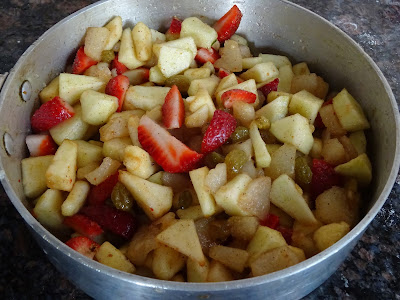 The pears looked as though they could do with a bit of cooking so I peeled, cored and sliced them. I added a bit of lemon juice to prevent them from turning brown. Then I placed them in a pan with some sugar (plenty of moisture in those pears) and let them sweat for about 5 minutes.
With the pears taken care of, it was the turn to do the same with apples. But they were kept raw.
The strawberries were washed, hulled, halved and quartered before they joined the apples.
After the pears had cooled down a bit, I added both the prepared fruits, then added the rest of the spices, raisins and sugar (after tasting). Added the flour to soak up the juices…then I gave it a gentle mix and set the pan aside as I got on with the crust.
The filling was about 21/2 cups. Since apples cook down, I made a pile that was a little higher than the height of my 8-inch pan. 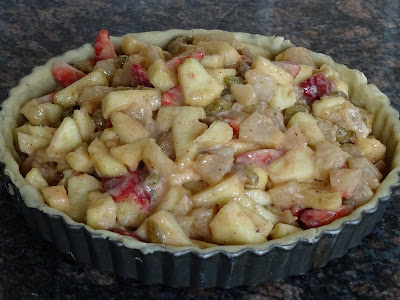 The final stage:
You’ll need 1 egg yolk for the egg-wash. Lightly beat the yolk with a bit of water or milk.

Take out one ball of pastry dough from the fridge and let it come to the point where you can roll it out on a lightly floured surface. This can be done as you handle the fruits so that you won’t have to wait…
Grease a pie tin. I used one with a removable bottom.
Roll out the dough into a circle that is a little bigger than the tin.
Roll the circle on the rolling pin and unfurl it on the tin.
Press the edges at the bottom of the tin and trim off excess dough again by running the rolling pin all across the border.
Prick tiny holes with a fork all across the base so that the pastry does not puff up during baking.
Chill it as you work on the top crust.

Take out the other half of the dough. Roll it out into a circle and then cut even strips using a cutter. I don’t have a 5 or 6-wheel cutter so my strips aren’t all that even.
Take out the prepared bottom crust and place the filling in it.
Now place the strips vertically on top of the filling. Fold back alternate strips and place another strip horizontally.
Repeat the process until the pie is covered with the lattice.
Trim off pastry overhang. With the remaining dough, roll out on a floured surface and cut out two long strips. Using a little egg wash to help it stick, place this along the border of the pie. Press lightly to keep it in place.
If you want, you can use a cutter and cut out patterns for more decoration on the lattice top.

I used a leaf cutter to hide the spaces where one strip ends and the other continues. Since there was enough dough left for a few more patterns I used a leaf cutter and went ahead with a handful of leaves….
Brush with egg-wash and bake in a preheated 200C oven for 15 minutes. Bring the temperature down to 180C and continue to bake till the crust is golden brown. This will take another 25 minutes or so. 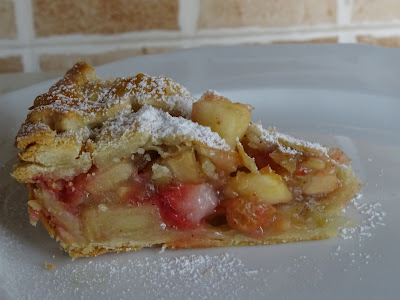 This pie with its mix of fruits and spices tastes lovely when still warm. Either with a dusting of icing sugar or a dollop of vanilla ice cream.