I love reading The Telegraph, our local paper that has always described itself as ‘unputdownable’. One perk that comes on Sundays is the magazine called Graphiti. And on my top list of weekend reading is the food column by Rahul Verma. Last Sunday’s edition had an article titled Beautiful In Black and that was all about black rice. Regular visitors might be aware of my fascination of the same and I have done a few posts on black rice.
But out there chefs are using this ingredient in ways that I hadn’t imagined before. Among the many listed, there was walnut stuffed black rice arancini, black rice seafood biryani, the same tossed with assorted vegetables and also stir-fried black rice with teriyaki sauce and shredded chicken. And I recently came to know that risotto cooked with black rice turns out really well. And since I had some in stock, I did the next best thing. Made the biryani. And carrot raita.:)

Since this was a trial run, I used only two cups of rice and six pieces of chicken with bones. With the latter, that happened to be the stock in my fridge.
Ingredients:
2 cups black rice
A mix of bruised whole spices (cardamoms, cloves, bay leaves, cinnamon sticks)
3 large onions, peeled and sliced fine
A bunch of mint and coriander, chopped
A handful of cashews
15-20 raisins
6 pieces chicken (I used drumsticks and wings)
1 onion grated
2 cloves of garlic, peeled and ground
A small piece of ginger, peeled and ground
2 tbs curd
Salt to taste
Chilli powder as per taste
Vegetable oil as needed

Wash and soak the rice for about an hour.
Meanwhile marinate the chicken with all the ingredients listed below ‘6 pieces of chicken’ for an hour.
Heat some oil in a pan and throw in a few Indian bay leaves.
Add the marinated chicken with all the juices and cook till the chicken is almost done. Add about half a cup of water and let the gravy thicken. This will take about 20 minutes.
Let the chicken cool in the pan as you get on with the rest of the ingredients.
Heat about a cup of oil in a pan and deep fry the sliced onions. I did this in two batches. Remove with a slotted spoon and place on kitchen paper.
In the same oil add the cashew nuts after reducing the flame. Fry for a couple of minutes till they turn golden brown.
Now turn off the heat and add the raisins. The residual heat is good enough for the raisins to plump up. Remove with a slotted spoon.
Heat water in a pan. It should be double the amount of the rice.
Drain the rice in a colander.
When it comes to the boil add the aromatics and then the rice.
Let the rice cook till it’s nearly done. With black rice the texture is a little chewy. You might feel that you’ll need to cook it a little more but that’s how it is…
Drain the rice in a colander.
Take a heavy-bottomed pan and grease it with the oil that was used for frying the onions and the nuts.
Put a layer of rice. Then place the chicken pieces on top of the rice. With a spatula, empty the contents of the pan…the bits of masala and gravy. Sprinkle generously with the chopped herbs. Scatter the golden fried onions and some of the nuts and the raisins.
With the remaining rice, make another layer and scatter the herbs and the fried onions. Sprinkle some warm water over the rice so that it does not dry out during cooking.
Cover with a lid and place some kind of weight on the lid. I used my grinding stone (pestle).
Place the pan on a medium flame for about 10 minutes, then reduce the flame and cook it for another 10.
Let it rest for another 10 minutes before you open the lid.
Transfer the contents on a platter and garnish with more nuts. I use fresh sprigs of mint from my pots. 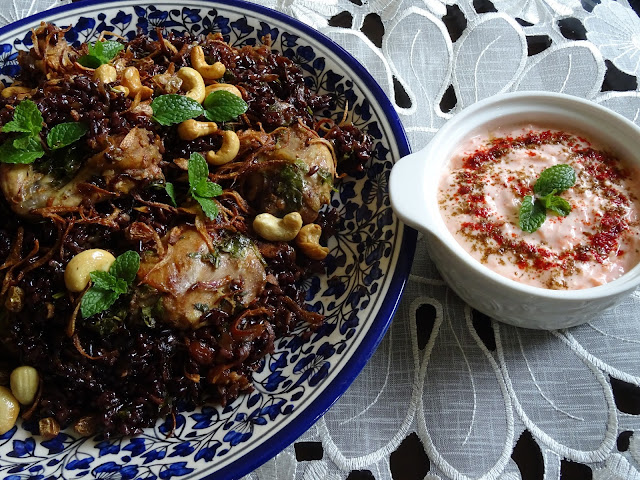 The carrot raita:
To make the raita I used 1 medium grated carrot. This was mixed into a bowl of well-beaten curd (250g) that had both salt and sugar added to it. The raita was garnished with toasted and ground cumin seeds, red chilli powder and a sprig of mint.
On the rice platter it does look as if the meat and rice ratio is awry. Had it been basmati rice, the plate would have looked fuller. Black rice doesn’t ‘expand’ like the other varieties.
Although I used aromatics, I could well do away with these in my next black-rice-biryani cooking. The house was full of the heavenly aroma of the rice during the cooking process. I added the spices because I was after all cooking biryani!  But I didn’t use butter or ghee.
There are several ways of making biryani and this must be the simplest of them all . But the taste was delicious. Black rice is sticky but it’s not like regular sticky rice. And I did think biryani with this rice might not be a good idea but before my stock is over, I’ll surely make this one more time.