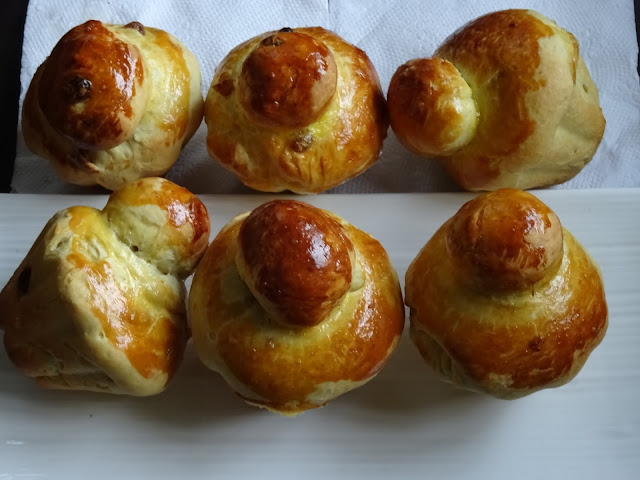 The last bakeware I ordered online in 2015 was a silicone briochette mould. I imagined this enriched bread with a topknot would look best in its fluted nest(s). Although this holds six brioches, I usually make the rest of the dough into round little buns. We had these for breakfast yesterday. They are so good on their own with a cup of tea but I made some orange butter and that took the taste a notch higher. I imagine food bloggers everywhere must be tempted with serve-ware and baking dishes. For me, sometimes it’s the crockery and the cutlery that grabs my attention rather than the food.:) On to the recipe now.

Method:
Sift the flour and salt in a warmed bowl and stir in the yeast, sugar, raisins and orange rind. In a separate bowl, mix together the eggs, water, and melted butter. Make a well in the centre of the dry ingredients. Pour the wet mix and make a soft dough. Transfer the contents on a floured surface and knead for at least 12-15 minutes. 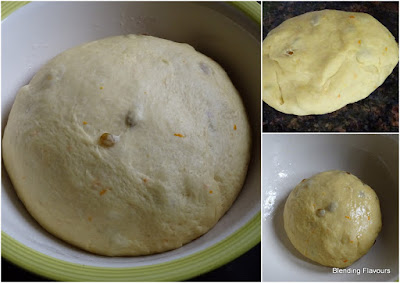 Brush a clean bowl with oil and place the dough in it. Cover with clingfilm and set aside for about an hour or until it doubles in size. Meanwhile grease the moulds if you’re not using silicone bake-ware.
Turn out on a surface dusted with flour and knead lightly for a minute. Roll the dough into a rope shape. Divide equally setting some of the dough aside for the topknots. Place the balls in the moulds. With a floured finger, press a hole in the centre of each ball. Shape the remaining pieces of dough into small balls and press into the holes. Flatten the tops slightly.
The classic way of making the topknot is shown in this video.
Cover the mould with a baking sheet and let the dough rise for another hour.
Brush the brioches with beaten egg and bake in a preheated oven at 200C for about 18-20 minutes or until they turn a rich golden brown.
Serve warm with orange butter.

To make orange butter, I added a teaspoon of honey, 1 teaspoon of orange rind and the reduced juice of 1 orange to 50 grams of soft butter. This was all mixed together. The orange juice was reduced down to 1 tsp. 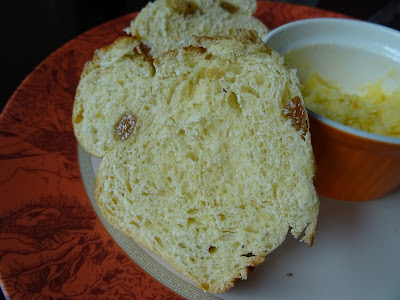 The orange butter complemented the hint of orange in the brioche. It was a mildly sweet breakfast but filling and extremely satisfying.
Although I have baked brioche several times, the inspiration for this particular recipe came from a tiny little book titled Baking: 100 everyday recipes by Parragon Books.

This recipe is enough for 12 brioches but I made them rather large and ended up with 8. Two were baked in a small tart mould.