I’m starting off September’s first post with a simple salad. Just like amaranth, the common purslane/Portulaca oleracea, sprouts amid my potted plants and in the ground each year. Purslane is most prolific around the height of summer and with all the rain that we get they look really healthy too. There isn’t much by way of harvest but enough to add them to some dishes like dal and mostly to aloo sabji. It’s a little acidic so a small bunch works out fine.
The idea of using corn and purslane came after seeing different recipes online. These weren’t teamed up together but since it’s the season of both, why not throw them into a salad…

This plant with thick rounded and smooth leaves has been given the name Parrot’s tongue/batho shlai in our language. It is also known as hogweed and pigweed. The plant bears yellow flowers and the tiny black seeds are formed in pods. Like other blooms in the same family, the flowers close early. Purslane is said to contain more omega-3 fatty acids than any other leafy vegetable. It also contains vitamins such as A, C, E and B and dietary minerals like magnesium, calcium, potassium and iron.

Perilla seeds (pictured below), like all oil-producing seeds have a nutty flavour. They are good on their own too, toasted and ground, with a dash of salt, chilli, diced onions and herbs. 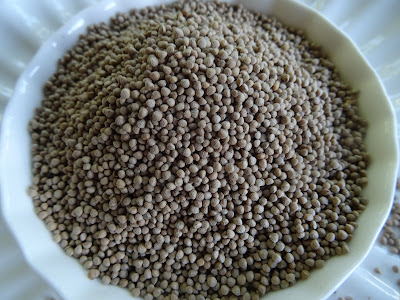 Put all the salad ingredients in a dish. Mix well. Drizzle the dressing all over the salad.
Raw purslane and raw corn (something that I learnt recently, the corn I mean) can be added but since I had cooked corn I added them and I really don’t like the taste of raw purslane. Hence the cooking and the steaming. This salad with its not-so-usual combination makes a great in-between snack.