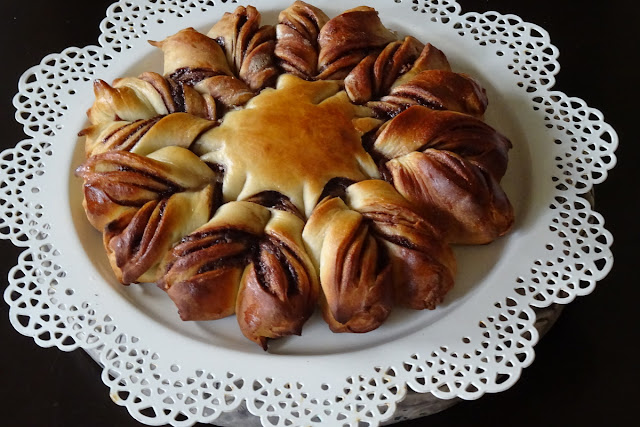 I don’t often indulge in Nutella deliciousness but as I was going about my usual pantry replenishment yesterday, I couldn’t resist reaching for a jar. But getting an ingredient like this makes you wonder what the next step is going to be…
I looked online and came across this recipe for braid and tear bread. I had never made this before and it was indeed a showstopper of a bread. The recipe is from here. I made very few changes.
As I type this the house smells wonderful with the aroma of this bread….

Ingredients:
31/2 cups all-purpose flour
3 tbs fine sugar
2 tsp active dried yeast ( I used Bluebird)
30 gram unsalted butter
3/4 cup warm milk
A pinch of salt
2 egg yolks
1 cup of nutella
A bit of vegetable oil to grease the bowl
The whites of the egg can be set aside for glazing the bread before baking
Add the sugar and the yeast to the warm milk. Stir gently with a spoon and set aside till it froths up.
Put the flour in a large bowl, add a pinch of sugar and the butter.
After the yeast mixture froths up, add it to the flour and bring the dough together.
Once it’s in one mass, tip the contents to your work surface that’s been lightly dusted with flour.
Knead for about 10 minutes by knocking the air out till the dough is smooth and elastic.
Transfer to an oiled bowl and cover with cling film. Leave in a warm place to rise till it’s double in size. This might take about an hour. 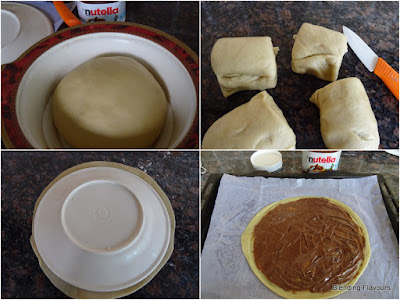 Remove from the bowl. Shape the dough like a long sausage by giving it a quick roll and cut into four pieces.
Take the first piece of dough, roll it into a ball, then roll it out into a circle.
Take a plate (the size of the bread you want) and press it on the circle (shown in the collage above) to make an impression.
Now with the help of a table knife spread the nutella inside the imprint. The excess dough will be removed later. 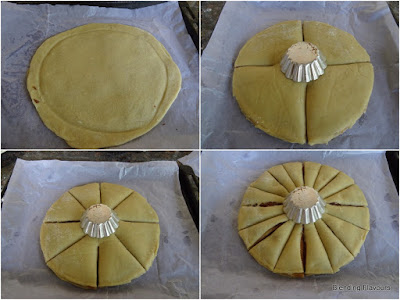 Repeat with the other two. Roll out, make the impression and spread the deliciousness.
(At this point I got so carried away that I used nutella for the last circle of dough. I had already made the first cut before I realized my mistake. I had to remove the spread and turn the whole thing upside down which resulted in the non-alignment of the cuts. There’s one that’s very prominent).
After the last circle is layered, use the same plate and cut off all the excess dough by cutting around the plate.
Place a small glass or tart tin in the middle of the bread and make four cuts as seen in the picture.
Then make another in the middle of the cut space. Repeat as shown in the collage. 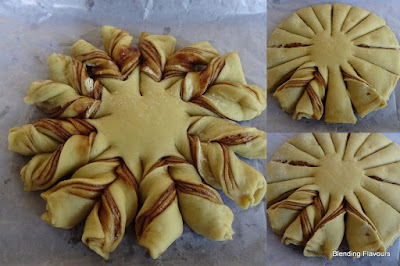 Now turn one cut piece twice. The adjacent piece must be turned in the opposite direction. Repeat till all the pieces are turned/braided.
Then seal the ends of the braids by pressing the edges with your fingers.
Cover with a kitchen towel and leave to rise for another 25-30 minutes.
Brush with the egg whites that had been kept aside and bake for about 25-30 minutes in a preheated 180C oven or until the bread turns golden brown. 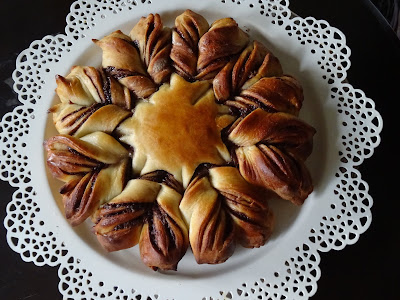 Remove and cool. It tastes so good warm from the oven. By far this has been the most satisfying bread that I have baked. Rich from the egg and the milk, nutty and chocolaty from the nutella…I think I’ll go and visit one of my friends soon. It’ll give me a reason to bake and wrap this bread in cellophane and a pretty ribbon. Maybe I’ll add a bouquet of flowers too.:)