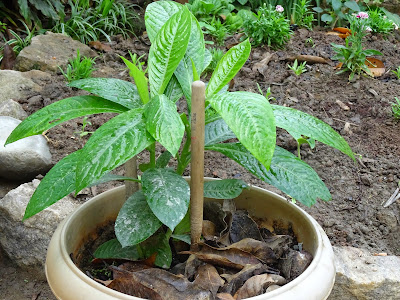 One species of blumea that I grow is the Blumea balsamifera. Known as mugongre in my mother tongue, its leaves are mainly used for making our wickedly pungent shaphinyaba/chutney. The leaves have a fresh and sharp, almost citrusy, kind of smell. This post is to share some of the pictures that I took of the plant since November last year. In the wild they grow luxuriant with leaves that grow much larger than the ones shown here. This was planted in late October after my sister’s trip to our good ol’ hometown, Haflong. My mother had sent a few tiny ones from her garden. Although blumea varieties have no trouble surviving in the wild, they are not meant for a long journey in the heat!:) But I’m glad two survived and I could take some pictures of the stages through the months that they have flourished in my pots. 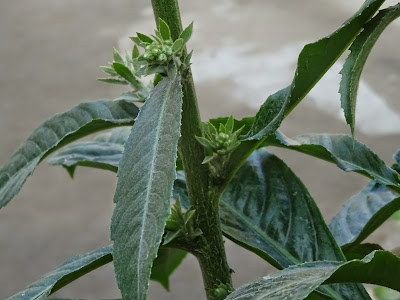 Notice how dark that green looks. Leaves with serrated edges. This was taken in January when the buds first appeared on the plants. 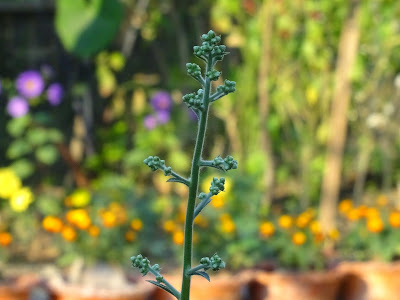 The marigolds and other flowers were still blooming in my front yard then. According to the book on Indian Medicinal Plants: An Illustrated Dictionary by C.P. Khare which I checked online, Blumea balsamifera grows in subtropical Himalayas, Nepal, Sikkim, Assam, and Khasi Hills at 700-1350 m. Among the many medicinal properties of the plant, one is that it is a rich source of Ngai or blumea camphor. Camphor occurs in all parts of the plant but is mainly extracted from the leaves.
The internet has several details about the medicinal values of this plant particularly in the Philippines and in China. 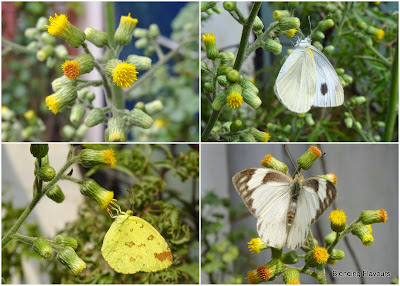 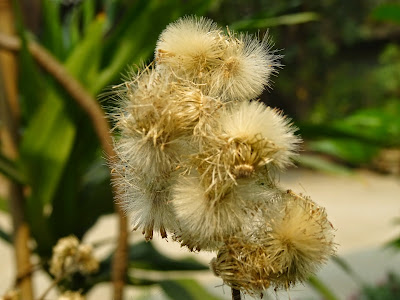 By the end of March, the flowers are dry and ready to be dispersed by the wind. And so the cycle continues. I may be swamped by several plants this year. Many will be given away but if I can feed the butterflies, it’ll definitely be worth growing them in my garden! And once in a while, I’ll pick and choose the tender leaves for the shaphinyaba/chutney that these leaves are meant for.