Another recipe that I had kept putting off for later was the very popular Mexican dish, enchilada. But yesterday with some bony bits of chicken going into a heavy-bottomed pan with onions, garlic, pepper, coriander and carrots and simmering away for more than an hour, I knew it had to go into another level of deliciousness. And the thought of the dish I had at my friend, Smita’s place, came to mind. She had made the maida/maize flour rotis so no ready-made tortillas for this one either. I made rotis with 2 parts all-purpose flour and 1 part maize flour. I also had a new pretty baking dish gifted by another friend, Ajita, when I had gone over to her place here in Delhi the other day for lunch. The only thing left to do was to assemble the ingredients. Wasn’t I glad I started a day earlier!
The sauce:
I got one and a half cups of stock from the leisurely cooking but to add more ingredients to it, I fried up a large chopped onion and two blanched and chopped tomatoes. 2 teaspoons of red chilli powder went into the pan. Then I added about half a cup of water to it and cooked it for a while. This was strained and added to the stock. With so much flavour in the liquid the only other thing left was to thicken it. So I heated up two tablespoons of olive oil, added 1 1/2 tablespoons of flour and cooked till the raw smell went off. Then I added the stock (remember all the ingredients that went into it) and let the mixture get a little thick. Then I transferred it to a bowl where it was  left to cool. 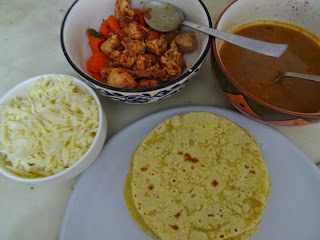 The tortillas:
Place 1 cup flour and 1/cup maize flour in a bowl. Drizzle about a tablespoon of oil, add a pinch of salt and knead to a soft dough by adding lukewarm water. Set aside for about 10 minutes covered with cloth.
Divide the dough into 8. Roll out into a medium-sized roti and cook in a tawa till done on both sides. Brush with a bit of olive oil. Repeat with the rest of the 7 rotis.
The filling:
1 cup of chicken breast, cut into small pieces
1/2 cup of carrots, picked from the stock earlier just when they turned soft
2 tbsp of the strained onion/tomato mixture from the making of the sauce
Pinch of pepper
Salt to taste
A quarter tsp red chilli powder
1 tsp olive oil
Leaving aside the oil and the carrots from this list, mix the rest with the chicken pieces. Heat the oil in a pan and fry the chicken in it till cooked through. Remove from the stove and set aside.

The cheese:
I used Cheddar. Grate a cup of the cheese and set aside till needed.
Assembling:
Preheat the oven at 180C as you get on with the assembly. Grease the baking dish lightly with oil.
Take one roti and spread a teaspoon of sauce on its surface. Add a few carrot discs, a few pieces of chicken and some grated cheese. Fold the roti and place it on the baking dish with the seam side down. Repeat with the rest of the rotis till all the filling is used up. Pour the remaining sauce all over. Scatter the rest of the cheese all across. (I felt that there should have been more sauce but there was none left. So I sprinkled some water on the exposed portions of the rotis).
Bake for about 15-20 minutes till the cheese melts and the sauce bubbles away merrily.
Remove and let it cool down. Garnish with coriander leaves before serving.

These were exactly how I thought they would be. I was a little worried about the sauce, the quantity I mean but it was still good. Worth every bit of effort to make a wholesome and delicious meal like these enchiladas!