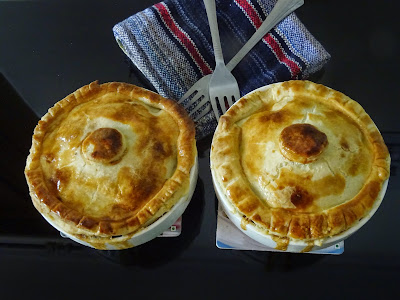 I started making pot pies fairly recently and I love them! For years I had this thing about pastry. I always felt that it was time-consuming. But thank goodness all that has changed. Partly it was watching the food shows that transformed my thoughts. Now I derive such joy from the entire process. Coming back to pot pies isn’t it wonderful that a bit of this and a bit of that, and there’s enough to fill the ‘pot’ and belly!:) I made these the other day. I thought of using up the chicken and the corn but ended up adding two more kinds of vegetables. The recipe below serves 2.

Wash and cut the baby corn on the diagonal.
Heat the oil in a pan and add the onions. Cook till translucent.
Add the potatoes,carrots and the baby corn.
Season with salt and pepper but go easy on the salt as the stock will be added later. Add the spinach.
Cook till almost done and then add the chicken pieces.
Pour the stock and let it come to a boil.
When the gravy is slightly reduced (this will take about 5 minutes), make a paste of the flour with a bit of milk and add to the pan.
Give it a good stir and take it off the flame. Add the grated cheese, stir, and let it cool.
While it cools down, take the dough out of the fridge.
Preheat the oven at 180C. Transfer the filling to 2 ramekins.
Roll out the pastry circles a little bigger than the pie dishes.
Cover the dish with one pastry circle. Press the edges inwards. Create patterns with a fork on the edges or any pattern you might like. With the remains of the dough I made a border as well as the “knobs” for the “lids”. The border was brushed with egg on the underside to help it stick. The same was done with the “knobs”.
Make one or two cuts on the surface with a knife for the steam to escape.
Brush the crust with beaten egg. Repeat the same process with the other one.
Bake for 30 minutes or till the crust is golden.
The smells that filled the kitchen made us even hungrier! A most satisfying dish…for baking as well as for eating!