These jam tarts are pretty special. How so? Because the fruit for the jam used here is from the plant that’s growing in one of my containers and I made the jam from my most recent harvest a couple of days ago. It’s the first time I’ll be posting about home-made jam. Another recipe for jam tarts is here. There are quite a few starfruit recipes in my posts. There’s pie, chutney, salad and an upside down cake with the fruit. I have mostly been a pickle person and most acidic fruits are pickled. But this is the sweet variety so jam (with the intention of using it in tarts) was what I made.
The starfruit jam:
For the jam I looked up online for recipes and adapted mine from here. Starfruit jam is not something I have tasted or made earlier. I used about a little over a kilo of fruit. The ridged edges were trimmed and the fruit was cut into long pieces. It was easier to discard the seeds this way. A thumb-size piece of fresh ginger was grated into the fruit bowl. Seeds from four cardamom pods were pounded and added to the mix. The proportion of sugar was half the quantity of the fruit. All this was mixed together, covered, and left overnight in the fridge to infuse.

The next morning the bowl was taken out and the fruit went into the blender. The mix then went to a pan on the stove where it simmered for nearly 45 minutes. I kept stirring at regular intervals and later did the plate test. A steel plate chilled in the fridge was taken out and a bit of the jam was dropped on the surface. The first test proved to be runny. And the second after a few more minutes remained a blob that did not budge. So the flame was put out and the jam was left to cool. Later, they were transferred to clean jars to be stored in the fridge.

The jam tarts:
2 1/2 cups all-purpose flour
1 cup butter, chilled and cut into cubes
1 egg
Rub the butter into the flour till the mixture is crumbly.
Break an egg into the mix and let the pastry come together.
If one egg isn’t enough, sprinkle a bit of chilled water to the mix.
Bring the dough together and shape it like a sausage as that makes it easier to cut and use then wrap in clingfilm and chill for at least at least 40 minutes. 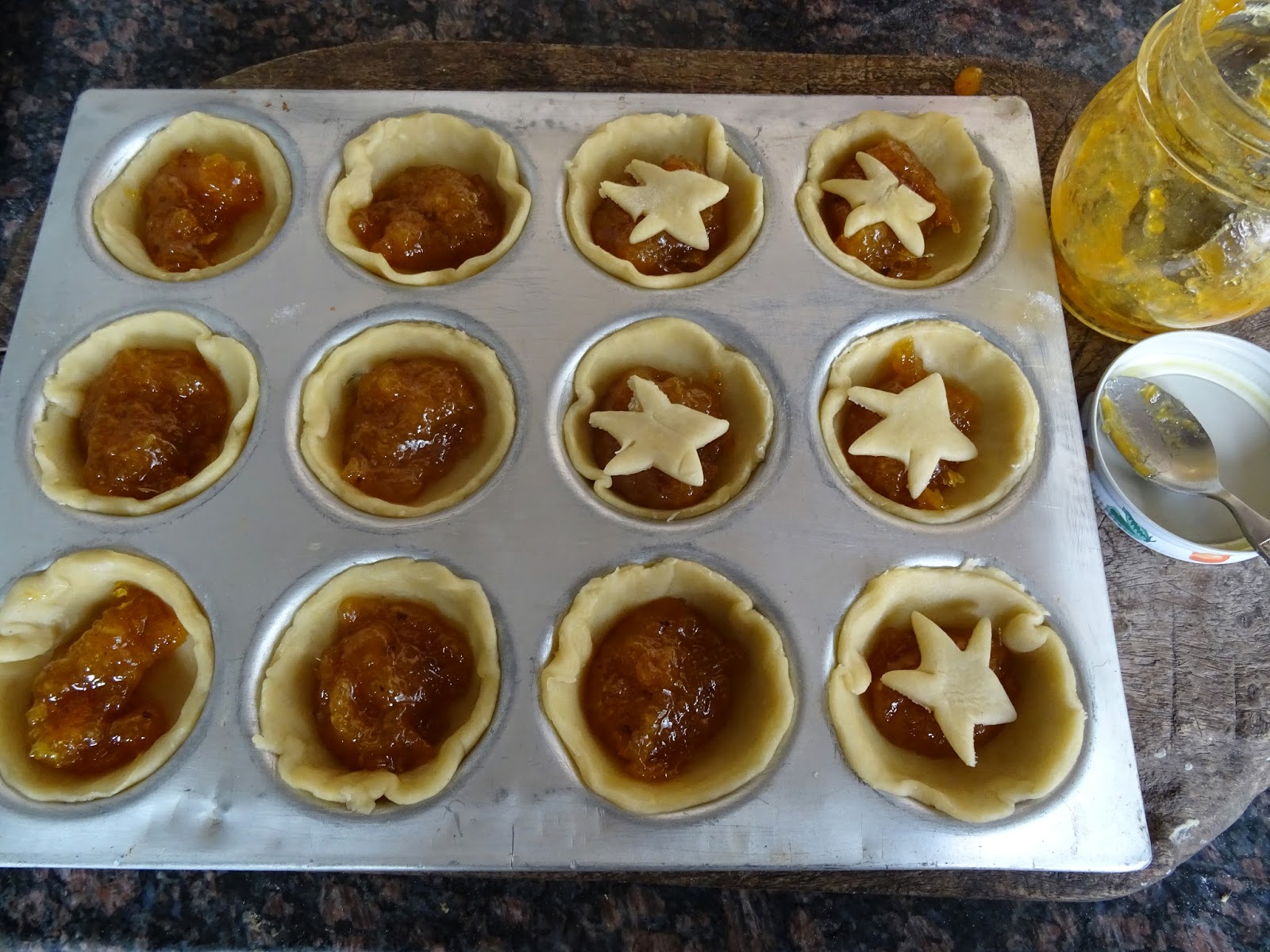 Lightly grease a muffin mould. Take the dough out and roll out a large circle.
Cut out the approximate size using a small bowl or plate for measurement. Continue till all the spaces in the muffin mould are filled.
Take a tablespoon of jam and place it on the tart shell.
With the remaining dough, roll out and cut out stars with the help of a cookie cutter.
Place them on top of the jam. Bake in a preheated oven at 180C for about 15-18 minutes or till the tarts are golden and the jam bubbles away merrily.
Remove from the oven and cool. Jam takes a longer time to cool down as compared to other baked goodies.
These are so good at teatime! Like a proud mother I am bursting with pride! Using home-grown fruit and home-made jam! They certainly aren’t good-looking jam tarts but they are stars in their own right!