Baba cakes in a brandy/apple syrup 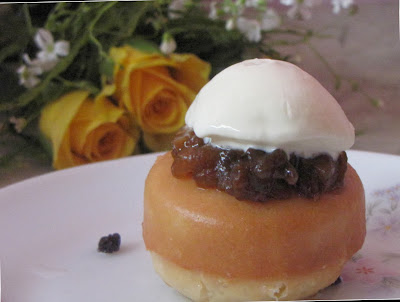 Year endings are pretty special. There’s more cooking happening.:)With all the cooking/blogging that’s going on in my life, I have become addicted to online shopping but it isn’t all kinds of stuff that I buy. Baking tins and platters and kitchen tools are what I look for, look at, look look….And am I glad I got this donut pan although it was a bit pricey. I happened to see another one that was cheaper only after I had already bought it and drooled at the shapes of the cakes that I had baked!!
About two months ago I made rum babas but without using the traditional tins. I used this pan and the size was right for individual servings. Although the size is small, adding the other components to the dessert made it just enough. For the dinner that we had the other day I made these cakes but instead of rum I used brandy and apple juice. I had seen the recipe in a special anniversary issue that Good Food India had brought out in November. The recipe is by Matt Moran but I had to make some adjustments as I didn’t have all the ingredients. The picture that accompanied the recipe was so stunning I knew I had to try it! Mine is of course nowhere near it but my guests loved the taste! The recipe included Calvados but I used regular brandy for soaking the cakes.
.

The accompaniments can be of individual preferences but here’s the recipe for the cakes from the magazine.
4 tbsp milk
2tsp maple syrup
2 tsp dried yeast
3 eggs
A pinch of salt
120 grams of all-purpose flour
3 tsp butter, chilled and diced
Combine the milk and maple syrup in a bowl, then add the yeast. Keep aside for ten minutes to activate the yeast. Beat the eggs lightly using a whisk, then stir into the yeast mixture. add salt to the flour, then add flour gradually to the yeast mixture combining well to avoid any lumps. Sprinkle diced butter on top but do not mix in. Cover the bowl with cling-film and allow to stand for one hour until the batter has risen. Fold in the butter.
Grease a few small muffin or dariole moulds with butter, then pour in enough batter to half-fill the moulds. Cover and leave for thirty minutes until the mixture has doubled in size. Meanwhile prepare the syrup. Put the apple juice, Calvados (or brandy) and sugar in a pan, and heat until the sugar dissolves. Set aside.
Preheat the oven to 180C and bake the cakes for 25-30 minutes. Remove from the oven and leave to cool in the moulds. Unmould the cooled cakes, then prick them with a skewer before soaking them in the Calvados syrup, then refrigerate.
The yeast cakes were served with a compote of apples, prunes, and dates. It was then topped with a small scoop of  vanilla ice cream.The batter from these ingredients produced 11-12 cakes in my mould. I made fifty three cakes and only a few remained! 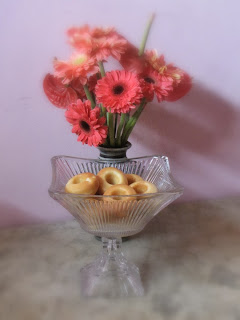 Thank you for stopping by today. Hope you check out my page on Facebook and like it! I wish all my blog friends and visitors a….
Happy New Year!