I had never tried making botvyanchi kheer before but the October issue of Good Food magazine/India had the recipe and a picture so how could I not make it?! The issue was loaded with festive goodies and I know that long after the festivities are over I’ll still be turning the colourful, visually spectacular pages, and heading towards the kitchen…
This recipe serves four but creating the thread-like botve does take some time. Incidentally, the term “botve” is derived from the Marathi word botn which means fingers. This is because the dough made of wheat and milk is shaped like fingers. Botvyanchi kheer is also known as ghavale which originates from the word gehoo (wheat) as dried botve resembles grains of wheat.

To make the botve you’ll need:-
5 tbsp atta
Two and a half tbsp milk
Mix and form into dough then take a pinch of the dough between your thumb and index finger. Turn it between your fingers and shape it like a grain of wheat. Drop it on paper placed on a tray. Allow each “grain” to dry at room temperature for a couple of days. You can cover the tray with a thin cloth. After drying, the botve can be stored and used.
The kheer was also made according to the recipe in the magazine. The adaptations I made are given in purple. 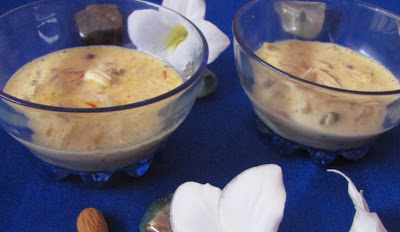 The Kheer:-
2 tbsp ghee
4 tbsp botve
6 cups of milk
sugar, according to taste
2-3 cardamoms, powdered
A few strands of saffron
10 almonds, slivered
A few raisins
Heat the ghee in a pan. Add the raisins and remove the pan off the heat. Stir and remove the raisins as soon as they swell up. Put the pan back on heat and fry the botve in it. Fry for a few minutes till the colour turns light golden. Add the milk. Keep stirring till the botve is cooked. The milk will begin to reduce as you cook. Take a tablespoon of milk and soak the saffron in it. Add the raisins, stir. Then add the sugar, the slivered almonds, and the soaked saffron. Cook for a few more minutes. Add the cardamom powder and check the sweetness. Remove from the flame. The dish can be served either warm or cold.
Thank you for stopping by. Blending Flavours is on Facebook. Do check it out and Like my page!