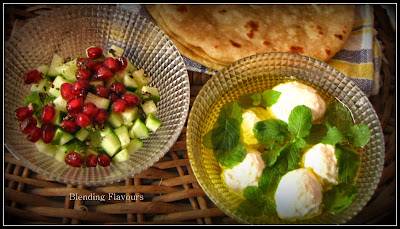 Labneh or strained yogurt had been on my must-do list for a while now. I have always been fond of yogurt and other milk products and in our house yogurt is usually consumed on its own with a touch of sugar or honey, added to curries, made into raita, made into paneer (once in a blue moon) and added to the dough for making roti. Making labneh was all about just a little more effort! But it was only a few days ago that I actually made some. I paired it with, not pita bread, but rotis that I made using the whey from all that draining.

Lunch was light and refreshing with the soft rotis paired with labneh, and a small bowl of fresh cubed cucumbers and pomegranate.

For the labneh:
1 kilogram yogurt
A quarter teaspoon salt
1 colander
1 large bowl on which the colander is to be placed
1 piece of cheesecloth or clean kitchen towel
1 cup of olive oil
A few sprigs of mint
Pour the yogurt in a large bowl and whisk it with the salt.
Line the colander with a piece of cheesecloth and place it on a bowl.
Transfer the yogurt to the colander. Tie up the ends of the cloth with a piece of string.
Put the colander/bowl in the fridge and leave for at least twenty four hours.
Take out the yogurt, the consistency will be like cream cheese and the quantity will become less.
Shape them into walnut-size balls and place them in a bowl. ( There were eight balls).
Pour about a cup of olive oil into the bowl and add a few sprigs of mint. This can be stored in the fridge for two weeks.

For the rotis:
About 155 ml of whey was added to 300 grams of whole wheat flour along with a pinch of salt and about two tablespoons of ghee. This was kneaded well and kept aside for half an hour before the rotis were rolled out, cooked on a tawa with a drizzle of more ghee. (The rest of the whey went into making a refreshing drink with rock salt and chopped mint).

The cubed cucumbers and pomegranates tasted good with coarsely grated pepper and no salt. I was glad I had left out the salt as the labneh was slightly acidic. The next time I make labneh, I’ll add some sugar in the yogurt and more flavourings in the olive oil. The possibilities are endless!