Time For A Quiche

I’d been thinking of making a quiche by using  some of the leafy greens that have cropped up in my pots. Spinach has always been a favourite but since other greens from the brassica family have re-seeded in some pots along with  purslane I combined the three leafy greens for this dish. This was also the first time I used my new fluted quiche dish that I had ordered online from Urban Dazzle. It’s large enough for several helpings:) and I like the blue tinge on the glass. 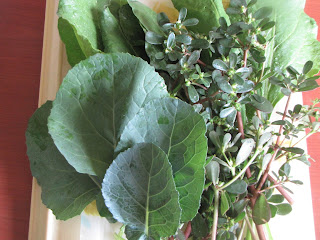 Purslane (the small succulent leaves on the right) springs up around this time of the year. This can be stir-fried or mixed with potatoes or in dal. It is considered to be nutritious and is rich in Omega 3 fatty acids and vitamin C.

Sieve the flour in a large  bowl. Cut the  butter into cubes and add to the flour. I chill it earlier after making the cubes. Using both hands, mix with the fingers until the mixture looks like breadcrumbs. Break an egg into the mixture. Mix. Sprinkle some chilled water and bring the dough together without kneading. Lightly flatten the pastry dough and put in in the fridge wrapped in cling-film. Chill for at least thirty minutes.

Heat the oven to 180*C. Take the dough  out of the fridge. As you wait for the dough to get softer, grease a quiche dish with butter. Take a sheet of grease-proof  paper and cut it in a circular shape slightly bigger than the dish. On a floured surface roll out the dough in a circle a little bigger than the quiche dish. Fold the rolled out dough on the rolling pin and place it on the dish. Trim the edges. Grease the grease-proof paper with butter and place it on the dish, buttered side down. Then place the baking beans on the paper. Bake for about 12 minutes. Then take it out of the oven, remove the paper and the beans and bake again for another ten minutes. The shell will by now, turn a golden brown. Take it out of the oven and prepare the filling.

Wash, drain, and chop the leafy greens. Peel and slice the onions. Heat oil in a pan and start with the salami. Fry them for a few minutes till they change colour on both sides. Remove. In the same pan, fry the onions till translucent. Then add the chopped greens. Continue to cook till they wilt. I’ve never tried using purslane in any baked dish but I guess it’s worth a try.

Break/separate the eggs in a bowl. Whisk and add cream (I used Amul Fresh cream). Keep whisking. Season with pepper and salt. Now layer the pastry shell with the salami, scatter the greens and the onions. Then pour the egg/cream mixture on top. Bake in a 180*C oven for about 30 minutes or till a knife inserted in the quiche comes out clean. Cool before serving.